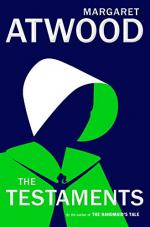 The Testaments: The Sequel to The Handmaid's Tale Summary & Study Guide

Margaret Atwood
This Study Guide consists of approximately 76 pages of chapter summaries, quotes, character analysis, themes, and more - everything you need to sharpen your knowledge of The Testaments.

The Testaments: The Sequel to The Handmaid's Tale Summary & Study Guide Description

The Testaments: The Sequel to The Handmaid's Tale Summary & Study Guide includes comprehensive information and analysis to help you understand the book. This study guide contains the following sections:

This detailed literature summary also contains Quotes and a Free Quiz on The Testaments: The Sequel to The Handmaid's Tale by Margaret Atwood.

The following version of this book was used to create this study guide: Atwood, Margaret. The Testaments. McClelland & Stewart, 2019.

Written almost 35 years after The Handmaid’s Tale, The Testaments is written from the perspective of three female narrators: Aunt Lydia, the powerful leader of the Aunts in the oppressive regime of Gilead, Daisy, a teenage girl living in Canada, and Agnes, a young girl that grows up in Gilead. The novel takes place fifteen years after the events of The Handmaid’s Tale, which ended ambiguously for that novel’s narrator, a Handmaid named Offred.

In the beginning, an unnamed narrator is writing a secret manuscript in the library of Ardua Hall. Eventually revealing that she is Aunt Lydia, known in The Handmaid’s Tale as the cruel disciplinarian of Handmaids, she writes about the goings-on of the Aunts in Ardua Hall; yet, she also alludes to the fact that the regime may topple as a result of her activities, the nature of which she is reluctant to reveal to the reader. Additionally, Aunt Lydia weaves in a narrative about her past during the coup of the United States government that led to the formation of Gilead: she was working as a judge that was captured by the Sons of Jacob, held in a stadium with other women, kept in an isolation cell, and eventually became the leader of the new women’s sphere, which involved the training of Handmaids, the education of schoolgirls, and the tracking of bloodlines to ensure that all babies born in Gilead are not crossbred.

Meanwhile, Agnes is a girl that spent her young life in Gilead – and her testimony describes what her childhood was like. She grew up in an upper-class family and had a mother, Tabitha, who loved her a lot, but died when Agnes was young. Agnes’ father, Commander Kyle, remarried a woman named Paula, who treated Agnes with disdain. When Agnes is thirteen, a powerful Commander named Judd is chosen to be her husband; however, with the help of Aunt Lydia, she is able to escape the marriage and begins living as a Supplicant, an Aunt-in-training, at Ardua Hall. She lives with her close friend Becka, who was also adamantly against marriage, due to her trauma from sexual assault perpetuated by her father.

The third narrative is from the perspective of Daisy, a teenage girl living in Canada with her parents Neil and Melanie. On the day of her sixteenth birthday, her parents are killed in an explosion at their business, a thrift store called The Clothes Hound, after which Daisy is taken in by their parents’ friend Ada, who is working for Mayday, the resistance movement against Gilead. Daisy finds out that she is Baby Nicole: an infant that was smuggled into Canada and that become a symbol both for pro-Gilead and anti-Gilead groups. Further, Mayday tells her that an anonymous source in Gilead that has promised them information that could topple Gilead, and the only one that can go collect the information is Baby Nicole herself. After training, Daisy/Nicole is picked up by Pearl Girls, missionaries from Gilead, and goes to the country, pretending that she is a convert to Gileadean ideals named Jade.

Aunt Lydia, who, unbeknownst to the reader has orchestrated Nicole/Jade’s arrival in Gilead, eventually reveals to Agnes and Daisy/Nicole that they are half-sisters, their mother being a former Handmaid that is now also working for Mayday in Canada. Revealing herself to be the Mayday source, Aunt Lydia puts a small chip into Nicole’s arm containing a document cache, and tells her that she must sneak out of Gilead with her sister Agnes, and bring the documents to Canada to expose Gilead’s massive corruption and topple the regime. Thus Agnes and Nicole head out on a dangerous journey, eventually ending up on an inflatable boat in the stormy ocean, paddling their way to Canadian shores. They make it, the documents are released, prompting a revolt, and the two sisters are reunited with their mother.

The epilogue is a transcript of an academic conference on Gilead Studies, held two hundred years into the future. A Professor Pieixoto lectures on the discoveries of three manuscripts: the Ardua Hall holograph written by Aunt Lydia, and two witness testimonies written by Agnes and Nicole. While he discusses the attempts made by scholars to date and verify the documents, he notes that the discovery of a statue with an inscription dedicated to “Becka,” erected by Agnes and Nicole, confirms that they are real.

More summaries and resources for teaching or studying The Testaments: The Sequel to The Handmaid's Tale.

The Testaments: The Sequel to The Handmaid's Tale from BookRags. (c)2022 BookRags, Inc. All rights reserved.