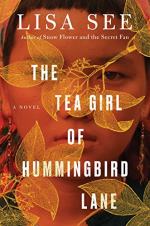 Plot Summary
+Chapters Summary and Analysis
Part I: The Akha Way 1988-1990: A Dog on the Roof – The Length of a Swallow’s Blink
Part II : A Beautiful Flower Calls 1994 – 1996: A Blind Kitten – Mother Love
Part II: A Beautiful Flower Calls (1994 – 1996) Shredded out of Existence - Goodbye to the Tears
III: The Outside World (1996 – 2006): Letters from Constance Davis – The Sweetest Dew of Heaven
Part IV: The Bud that Stands Out (2007 -2008): A Chicken, A Goat, and a Coin - Breathe, Breathe, Breathe
Part V: The Tea Girl of Hummingbird Lane: The Disappointment – A Pilgrimage to the Place of Origin
Free Quiz
Characters
Symbols and Symbolism
Settings
Themes and Motifs
Styles
Quotes
Order our The Tea Girl of Hummingbird Lane Study Guide

Related Topics
Dragon Bones: A Novel
Dreams of Joy: A Novel
Snow Flower and the Secret Fan
The Island of Sea Women
On Gold Mountain

Lisa See
This Study Guide consists of approximately 52 pages of chapter summaries, quotes, character analysis, themes, and more - everything you need to sharpen your knowledge of The Tea Girl of Hummingbird Lane.

This detailed literature summary also contains Quotes and a Free Quiz on The Tea Girl of Hummingbird Lane by Lisa See.

The following version of this book was used to create this study guide: See, Lisa. The Tea Girl of Hummingbird Lane. Scribner, 2017. First Scribner hardcover edition.

The novel begins in Spring Well Village, where a young Li-yan joins her family for breakfast. Each son tells their dreams, which A-ma, Li-yan's mother, interprets as she does every morning over breakfast for the family. She then asks Li-yan to tell her dream. However, the young girl lies, as her real dream was filled with bad omens.

The family then goes to pick tea and sell it at the market two hours away. However, they arrive late, and are only able to sell for half the price. While at market, Li-yan meets a pancake stealing boy named San-pa, who gives her a bite of his pancake. She is then blamed for stealing it, and must go through a ritual to cleanse her sins.

Weeks later, Li-yan joins her A-ma at the birth of Deh-ja’s baby. However, the labor goes very poorly, and Deh-ja ends up giving birth to twins which are considered human rejects in their village. The babies are killed and she and her husband are exiled from the village, which Li-yan does not understand.

Twelve days later, Li-yan goes to school where she has achieved the highest grade of her family. After listening to a lecture of Teacher Zhang, she goes home where A-ma shows her the grove she owns. It is an old tree of leaves that the men of the family believe is cursed. Li-yan is not very impressed, and convinces Teacher Zhang to help her tell the others in her tribe that she wants to continue her schooling. After many conversations, he is finally able to convince the town elders to let her continue. When Li-yan gets to her new, second-tier school, she sees San-pa, the only other Akha there.

In September, the tribe celebrates the swing festival, where young girls and boys are encouraged to make love to each other to prepare for marriage. Li-yan is enamored with San-pa, and he is the only boy she will sleep with during the festival. Her family, however, hates San-pa, believing him to be a terrible match for her. He leaves, promising to return and find her at university.

Some day later, Mr. Huang arrives in the village. He wants to use the tribe's leaves to make a rare tea called Pu’er, and promises to pay them 10 times as much as they make at the normal marketplace if they let him. The tribe helps him gather the leaves. Li-yan sells her leaves from the grove without telling A-ma. However, after being gone for so long, Li-yan has lost her chance to continue her schooling. She also learns that she is pregnant, and a baby born out of wedlock with no father to claim it is considered a human reject. Li-yan and A-ma go to the grove to birth the baby and plan to kill it. However, A-ma lets the little girl live and tells Li-yan to go to Menghai and leave the baby at the orphanage. Li-yan takes the three-day trip to save her daughter, leaving a headdress and a tea cake with the baby.

Mr. Huang returns for more tea as Li-yan struggles with losing her daughter. A-ma discovers that Li-Yan has sold leaves from their grove. This leads her family to ignore her and she ends up sleeping under the house with the animals. Suddenly, San-pa returns, they marry, and head for Thailand. She tells him about her missing daughter and they go to the orphanage where they learn their daughter has been adopted and sent to America. They go to a village in Thailand where they live in poverty. San-pa becomes addicted to heroin and Li-yan runs to leave him. He finds her in the woods and gives his life to kill a tiger that would have killed her.

She returns to his home to tell his family, before going to her grove where A-ma meets her. Unable to go back to her village, A-ma takes Li-yan to Teacher Zhang who sends her to Kunming for trade school. Meanwhile, we learn that Li-yan's daughter, named Haley, has survived a dangerous disease, and is going to make a wonderful recovery.

The reader then reads eight years of letters between Haley’s mother Constance and Haley’s grandmother. They detail Haley’s life growing up as well as their induction into a group called Families with Children from China. Haley does well in school, but when she gives a cultural presentation, she focuses on her arrival from China instead of the history of her adopted parents. This makes constance question if Haley feels like a part of the family. Haley's family supports her wanting to find her birth mother.

Meanwhile, a 26-year-old Li yan prepares for an interview for a prestigious tea program. At first, the interview does not go well until Tea Master Sun arrives. Li-yan attempts to impress him, but leaves unsure if she is going to get the spot. She heads home for a few weeks and learns that her village has been changed by technology and tea production. Only A-ma follows all the traditions. Her family all tell her that they do not believe Li-yan should be alone, and A-ma tells her that Li-yan will find someone to marry soon.

When Li-yan returns to Kunming, she learns that she has been accepted into two tea programs. She studies directly under Tea Master Sun. After 12 months, she joins an unknown partner and starts her own shop called Midnight Blossoms in Guangzhou. She develops a reputation for being fair and honest. Months later, she meets a woman named Mrs. Chang. The two develop a friendship and Mrs. Chang asks to introduce Li-yan to her son Jin. Although Li-yan is initially hesitant, she eventually falls in love with him.

Meanwhile, Haley begins to grow up, and is currently in the fifth grade.

Mr. Huang arrives at the tea shop, asking to catch up even though Li-yan is not interesting in speaking with him. A few weeks later, Jin takes Li-yan to a colonial house and proposes to her. They talk for a while about their pasts and she agrees to marry him. They ask Ci-teh to run Midnight Blossoms while they go on their honeymoon. They have an Akha wedding and then head to America where they buy a home and move in. Ci-teh is doing great business, so they decide to stay. However, when the price of Pu’er plummets, Li-yan learns that Midnight Blossoms has been marked as selling counterfeit. She returns to learn that Ci-teh has lied to her. She goes to Spring Well to confront Ci-teh. After the two argue in front of the village, it is ruled that Ci-teh was in the wrong and she is exiled from the village.

Jin and Li-yan goes to the orphanage and learn her daughter was sent to Hollywood. While there, Li-yan finds Deh-ja and picks her up as a helper who can take care of Li-yan during her pregnancy.

Meanwhile, Haley attends group therapy for Chinese adoptees as she is struggling with bullying and feelings toward her adoptive parents.

Jin, Li-yan and their family return to Spring Well Village to help with the production of new tea leaves. She asks A-ma to help deliver her baby, but A-ma disagrees and tells her to have the baby in America. Midnight Blossoms reopens as a success, and they leave Jin’s mother to run it while they head to America. There, Li-yan has her baby, who she names Paul in American, and Jin-ba in Akha.

Haley writes a story about herself and her experience with her parents. She talks about her life as an adopted child and how her parents took her to China when she no longer wanted to go. She enjoys her time there, but learns little about her birth mother.

Meanwhile, Paul, Li-yan’s child, is having night terrors, believing he is drowning in a monsoon. Li-yan blames herself as she has been complaining about how the weather is affecting her tea. Li-Yan is now 37 and Jin has come to terms with his previous relationship with his father. The price of Pu’er has gone up again. Ci-teh has changed her land to coffee, but the novel does not say if she is successful. Li-yan tries to find her daughter, but is unsuccessful.

During this same time, Haley exchanges e-mails with her professor where she explains that a man named Sean is willing to take her to the origin of Pu’er.

Later, Li-yan meets with Mr. Huang and learns that his son was saved from bone cancer by the leaves of her grove. He wants to find it before other connoisseurs do, as he believes it can save future generations of his family because they are predispositioned for the cancer. Jin and Li-yan travel to Spring Well Village where she confronts A-ma and tells her that the grove is in danger.

The narration then changes to Haley who is preparing to leave for China to discover how to create Pu’er and where it came from. She meets Sean on the plan and the two explore many different cities to understand how the tea is made. Haley realizes she likes Sean and the two sleep together before traveling to Spring Well Village. When there, Haley shows her tea cake to the tribe. A-ma promptly steals it and runs away. Haley chases her up to the grove where she meets a woman who she immediately knows is her birth mother, Li-yan.

More summaries and resources for teaching or studying The Tea Girl of Hummingbird Lane.