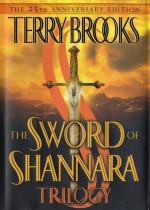 Terry Brooks
This Study Guide consists of approximately 64 pages of chapter summaries, quotes, character analysis, themes, and more - everything you need to sharpen your knowledge of The Sword of Shannara.

In chapter 27, Flick is still in the Gnome camp when he fears he is discovered but instead he realizes the Gnome wants help delivering food to the Trolls guarding the very tent he wants to enter. He finds the Elf King, Eventine is the captive and says one word to him, Allanon. Later in the dark, wet night, Flick frees the Elf by cutting a hole in the tent. As they flee, they have to fight Gnomes, and Eventine is badly injured in the second fight.

As they pass the far sentry, their luck runs out and the King no longer has the strength to fight. Flick calls for Allanon who hears and rescues them by using wizard fire on the pursuing Northlanders.

In chapter 28, the people of Kern arrive in Tyrsis and Leah is one of the last through the gates. A...

More summaries and resources for teaching or studying The Sword of Shannara.

The Sword of Shannara from BookRags. (c)2022 BookRags, Inc. All rights reserved.