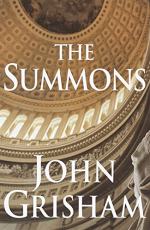 Related Topics
A Time to Kill
John Grisham
The Brethren
The Broker
The Chamber
The Client
The Firm
The Last Juror
The Pelican Brief
The Racketeer
The Rainmaker
The Runaway Jury
The Testament
Sycamore Row
Gray Mountain
The Whistler
Camino Island
The Rooster Bar
The Reckoning: A Novel
The Innocent Man
Witness to a Trial
The Guardians: A Novel
Camino Wind
A Time For Mercy
Sooley
Calico Joe
The Judge's List
Sparring Partners
The Boys from Biloxi

The Summons Summary & Study Guide includes comprehensive information and analysis to help you understand the book. This study guide contains the following sections:

This detailed literature summary also contains Quotes and a Free Quiz on The Summons by John Grisham.

The following version of the novel was used to create this study guide: Grisham, John. The Summons. Dell, March 16, 2010. Kindle.

In The Summons, a novel by John Grisham, Ray and Forrest Atlee are the sons of well respected Chancellor Reuben V. Atlee. The brothers could not wait to leave their hometown of Clanton, Mississippi. Ray was drawn by more lucrative offers up north while Forrest was drawn away by his abuse of both alcohol and drugs. Neither son looked forward to returning home when each received a summons from their father requesting they meet him to talk about his estate. Ray arrived at the house to discover that his father, who was dying of cancer, had passed just prior to his arrival. As he poked around his father’s study, Ray was surprised to find $3.1 million in cash tucked away in a cabinet. Ray’s decision to not tell his brother about the cash and keep it for himself ultimately results in a clash between the brothers.

Ray dreaded the trip home to Clanton, away from the comfortable life he had created for himself in Charlottesville. He was still dealing with a painful divorce in which his wife left him for a rich man. He did not want to be reminded of his unhappy childhood. Regardless, Ray arrived in Clanton at the appointed time. At first, he believed his father was napping. Then, Ray realized he was not breathing. He had apparently lain down for a nap and passed away in his sleep. Waiting for his brother, Forrest, to arrive Ray found a copy of his father’s will and a good deal of cash stashed away in a cabinet. The cash was not mentioned in the will. Without even calling the police or funeral parlor, Ray left his dead father on the sofa and hid the money in a broom closet.

That night, Ray tried to sleep in his childhood home, but his sleep was interrupted when someone tried to break into the house. Ray transferred the cash from the house to the trunk of his car, hoping to keep it safe. A few days later, Ray arrived at the house and discovered someone had broken in. The boxes in which the money had been stored were thrown around his father’s study indicating that someone knew the money was there and was looking for it. Ray feared the money might get him killed, but he kept it anyway.

Trying to determine where the cash might have come from, Ray used some at a casino near Clanton in order to make certain it was not counterfeit. During a trip to Atlantic City Ray used more of the cash at a variety of casinos, hoping that if the money was marked, he would be notified. When Ray learned that his father had been visiting casinos after his retirement, he arranged an interview with the owner of one of the casinos and confirmed that his father had never been a big enough winner there that he had caught their attention.

On a fluke, Ray went to Biloxi after he determined that one of his father’s trial files was missing. He contacted Patton French, a lawyer associated with that case, and learned that his father had been hand-picked for it. The wrongful death case dealt with a drug that had been rushed to market and only later discovered to be responsible for damaging the kidneys. Judge Atlee had ruled in favor of the plaintiff and also ordered $10 million in punitive damages, something that was unusual for his father. French credited Judge Atlee with the millions he had earned from lawsuits stemming from this trial. He told Ray that he had given the judge part of the money he received, more than $3 million, as a thank you. The lawyer believed that Gordie Priest, the man who delivered the money to Judge Atlee, was the one who was trying to steal the cash. French told Ray that he already had ordered Gordie killed because he had stolen from French. He promised that he would put more emphasis on finding Gordie even though Ray did not want the man killed.

When Ray returned to Clanton for the probate hearing for his father’s estate, Ray tried to spend the night at his father’s house. Just after midnight, a brick was thrown through a window with a note attached warning him to put the money back where he found it and leave the house. A few minutes later Ray received a phone call telling him again he needed to put the money back and leave. Scared for his life, Ray did as he was ordered. He got in his car and headed back to his home but was stopped and arrested for reckless endangerment when he was barely out of Clanton.

While Ray was being booked into the jail, he learned from Harry Rex’s wife that Judge Atlee’s house was on fire. Ray rode with the officer to his childhood home, which was already fully engulfed in flames and smelled heavily of gasoline. Ray believed it was Gordie who had set fire to the house but when he talked to French a few days later, he learned that Gordie was dead before the fire was set. Meanwhile, Forrest walked away from the rehabilitation center to which he had begged his brother to send him. Ray became suspicious of Forrest when he learned from Harry Rex that a fellow lawyer had seen Forrest taking Judge Atlee to the doctor’s office just a few days before the judge died.

Ray tracked Forrest down at a high dollar rehabilitation center in Arizona where Forrest admitted that he had gone home to visit their father about a week before he died. Forrest had taken care of his father, who was in a good deal of pain, and gotten him hooked on the morphine pack. When the Judge was asleep Forrest had been able to search the house. He had found the money but left it where it was because he wanted to find out how Ray would handle it. He had wanted to believe that Ray would split the money with him but when he lied about it, Forrest had come after him. He told Ray in a year, when he was released from that rehab program, he would consider splitting the money with him.

The Summons from BookRags. (c)2022 BookRags, Inc. All rights reserved.