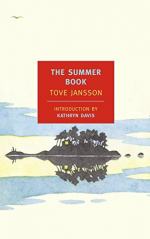 Tove Jansson
This Study Guide consists of approximately 30 pages of chapter summaries, quotes, character analysis, themes, and more - everything you need to sharpen your knowledge of The Summer Book.

This detailed literature summary also contains Quotes and a Free Quiz on The Summer Book by Tove Jansson.

The following version of this book was used to create the guide: Jansson, Tove. The Summer Book. New York Review Books, 1974.

The novel begins with Sophia, a six-year-old girl living on a remote island in the Gulf of Finland with her father and grandmother. Sophia and her grandmother take on a multitude of adventures throughout the summer. The novel is told through a series of short vignettes, each of which can be read alone as they are largely self-contained stories and memories. These vignettes span the past, present, and the characters dreams for the future when their illustrious summer comes to a close in August.

Sophia enjoys spending time down by the ocean, and Grandmother urges her not to swim out too far. When Sophia thinks about her late mother, she is often confused because the family never talks about her. She is only mentioned once in the beginning of the novel. Sophia and Grandmother venture out into the dead forest on the island that Sophia believes is a magical forest. Grandmother carves animals out of the dead wood and the bones that wash up on the shore.

Sophia asks Grandmother tons of questions every day, but she is especially focused on God, prayer, and heaven. She asks what heaven will look like, but Grandmother pretends to be asleep so she does not have to answer any more questions. Grandmother urges her to be respectful of the beliefs of others whether they believe there is a heaven or not.

Sophia and Grandmother build a pretend mold of Venice, a nod to Grandmother's trip to Venice in her youth. Sophia asks if she can call Grandmother "Mama" instead, introducing the difficulty that Sophia has with lacking a mother figure in her life. When there is a strong storm at night, the mold of Venice washes away and Grandmother works tirelessly into the night to rebuild it so as not to disappoint Sophia when she wakes up.

When Sophia gets a small cat named Moppy she tries her hardest to make him love her. He is more independent and Sophia wonders if she should just give up on love and caring for others. She concludes that she must simply love Moppy ever more persistently until he loves her back. Sophia and Grandmother continue their explorations of the island while peripheral characters flit in and out of the narrative.

Sophia's family friend, Eriksson, appears on his boat and adds some excitement to Sophia's sometimes dreary perception of island life. He is ephemeral and never stays in one place for too long, as evidenced by his short visit to Sophia's family.

Sophia's relationship with her father deepens in a vignette which shows her clinging to his bathrobe in order to bring her comfort when he spends a long stretch away from home during a storm. Sophia continues to explore the island nature with Grandmother, interacting with critters and animals. As the summer begins to fade, Sophia grows more insistent about learning about the island and her grandmother, highlighting the closeness of their bond. The novel ends after the summer, in August, when the first beginnings of fall appear and the family prepares for transition.

More summaries and resources for teaching or studying The Summer Book.