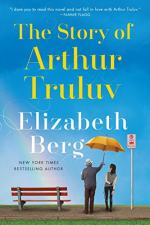 The Story of Arthur Truluv Quotes

Elizabeth Berg
This Study Guide consists of approximately 44 pages of chapter summaries, quotes, character analysis, themes, and more - everything you need to sharpen your knowledge of The Story of Arthur Truluv.

It's not the same without her, though. Not one thing is the same.
-- Arthur Moses

Importance: Though it has been six months since Nola has passed away, Arthur still feels her absence acutely. This plays into why he feels the urge to visit her daily, regardless of weather, in the cemetery. He even refuses to change up the furniture arrangement in his home, as it is clear he has been unable to move on from her death, along with Gordon.

I think you're fucking weird.
-- Anderson

Importance: This quote encapsulates Maddy and Anderson's relationship. Though Anderson can be charming, he is mostly rude and dismissive of Maddy and her unique personality. Here, he tells Maddy she is weird due to her fondness for cemeteries. Instead of trying to understand why Maddy feels lonely to the point of needing to visit the dead, and why she feels at peace there, Anderson instead condescends like everyone else...

More summaries and resources for teaching or studying The Story of Arthur Truluv.

The Story of Arthur Truluv from BookRags. (c)2023 BookRags, Inc. All rights reserved.