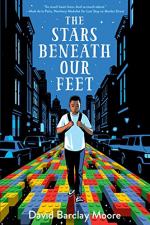 The Stars Beneath Our Feet Summary & Study Guide

The Stars Beneath Our Feet Summary & Study Guide Description

The Stars Beneath Our Feet Summary & Study Guide includes comprehensive information and analysis to help you understand the book. This study guide contains the following sections:

This detailed literature summary also contains Quotes and a Free Quiz on The Stars Beneath Our Feet by David Barclay Moore.

Wallace Rachpaul is a young black boy growing up in the St. Nicholas housing project of Harlem. Wallace's brother died just a few weeks earlier, leaving Wallace and his parents to figure out how to cope with their anger and sadness. Wallace's parents are divorced. His mother, Sue-ellen, has announced she is gay, and she has a close relationship with a woman named Yvonne. His father, Benny, has a series of girlfriends and is disparaging of Sue-ellen's friends and lifestyles. Benny is seldom present, but he is interested in Wallace's life and well-being. It is noteworthy that Wallace makes the distinction between his ethnic background and those of other blacks in the neighborhood. Wallace's ancestry is Caribbean, and his father is actually in the country illegally. His friend Vega is from the Dominican Republic and they visit there each year. Others in the neighborhood are African Americans. Though Wallace makes these distinctions at one point, he generally refers to the blacks of different ethnic backgrounds as black.

Wallace is fighting a darkness that Wallace compares to a rock in the middle of his chest. Wallace has not told anyone that he and his brother, Jermaine, were in the midst of a serious argument when Jermaine died. Jermaine had become involved in gang-related drug activity. His first involvement was minor and he warned Wallace to stay away from the barbershop that was the hub of the gang activity. Later, Jermaine invested more of himself in the gang activity, and he began to pressure Wallace to join. Wallace refused, which made Jermaine angry. The two were heavily involved in the argument when Jermaine died.

As Wallace struggles with his grief and his guilt, he becomes cruel to other people. As he struggles to deal with the gang-related people and issues in his neighborhood, he begins to consider joining a gang, mostly for protection. Wallace's best friend, Vega, also feel the pressure to join a gang. Vega goes so far as to consider killing two local gang leaders. Wallace is on the verge of joining Vega in his course of action.

Yvonne can see Wallace struggling, and she takes bags of Legos from her job at a toy store. The Legos help Wallace cope, and he makes a new friend. An autistic girl named Rose builds with Wallace. Each learns from their friendship. Then, after Yvonne’s arrest, Sue-ellen's reaction makes Wallace see that he must take his life in a different direction. He talks to Vega about the fight he and Jermaine were having just before Jermaine's death. Wallace and Vega decide they have to take the high road if they expect their lives to turn out better than the gang members who never escape from lives of poverty and violence. They take that step together. Vega has a gun that he is supposed to use to kill two gang members. Instead, he and Wallace throw the gun into the river. As the novel ends, Wallace, Vega, Sue-ellen, and Yvonne walk together. They are planning to go to dinner, and they agree with Wallace that it is time to have some new experiences. With that in mind, they dismiss their plans to go to their usual restaurant and Wallace sets out to lead them to a food truck downtown.

The Stars Beneath Our Feet from BookRags. (c)2022 BookRags, Inc. All rights reserved.