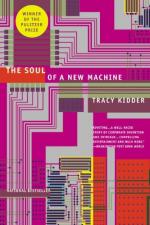 Related Topics
Strength in What Remains

The Soul of a New Machine Summary & Study Guide

Tracy Kidder
This Study Guide consists of approximately 41 pages of chapter summaries, quotes, character analysis, themes, and more - everything you need to sharpen your knowledge of The Soul of a New Machine.

The Soul of a New Machine Summary & Study Guide Description

The Soul of a New Machine Summary & Study Guide includes comprehensive information and analysis to help you understand the book. This study guide contains the following sections:

This detailed literature summary also contains Topics for Discussion and a Free Quiz on The Soul of a New Machine by Tracy Kidder.

The Soul of a New Machine by Tracy Kidder is about Data General Corporation and the development of their first 32-bit Eagle computer. Data General was started by four young men. Edison de Castro, who became the president of Data General, two other engineers from Digital Equipment Corporation and a fourth person named Herb Richman. The company, which began its days in a former beauty shop, has its headquarters in Westborough, Massachusetts in a building known as 14A/B or Webo. Once founded the company grew by leaps and bounds, holding its own again IBM, Sperry Univac and others.

The story of what about thirty whiz kids, known as Microkids and Hardy Boys along with a few of their managers did was almost unbelievable. They invented and designed a 16-bit compatible 32-bit computer in a little over a year with a radically new design that was more than competitive in a young computer market. This book is the story of the exciting journey that these young engineers embarked on when they went to work on the Eagle Eclipse project. Their manager Tom West relayed the specification from their company president Ed de Castro that there be no bit mode and that the new machine must be compatible with the 16-bit Eagle, meaning it must be able to use the software from the 16-bit machine. How to do it was up to the team, which is one of the reasons why the young team, many of them right out of college, like working at Data General. Other companies, like IBM, would not have given them the opportunity to play such a major role in a project like the Eagle project did.

This interesting book shows the reader how the Eagle came into being. It shows how the various technical problems were encountered and solved. Since there is so much technology involved in computers, there are many technical terms that are well-explained by Kidder. There is a lot of technological information about how computers function and malfunction. One of the most interesting parts of the book is the debugging process; as the reader watches the various team members encountering one problem after another. Kidder takes the reader through the debugging process step by step, explaining how various problems are diagnosed and fixed.

Data General's unique management process is referred to as mushroom management. Basically, there is very little direction from management. The different groups are left to negotiate their own problems, when problems arise. There is no manager that they can run to make a decision or to make assignments.

This book is exciting reading for anyone who wants to learn about computers or some of the history of the computer industry.

More summaries and resources for teaching or studying The Soul of a New Machine.

The Soul of a New Machine from BookRags. (c)2022 BookRags, Inc. All rights reserved.