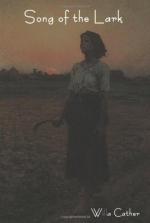 The Song of the Lark Summary & Study Guide

Willa Cather
This Study Guide consists of approximately 43 pages of chapter summaries, quotes, character analysis, themes, and more - everything you need to sharpen your knowledge of The Song of the Lark.

The Song of the Lark Summary & Study Guide Description

The Song of the Lark Summary & Study Guide includes comprehensive information and analysis to help you understand the book. This study guide contains the following sections:

This detailed literature summary also contains Topics for Discussion and a Free Quiz on The Song of the Lark by Willa Cather.

Willa Cather's "The Song of the Lark" is primarily the story of a young girl's coming of age and her development into a great artist. However, it also tells of her struggle against adverse circumstances to become successful. Thea Kronborg is raised in the suffocating and gossipy small town of Moonstone, Colorado. In order for her to reach her full potential Thea must leave her hometown, and sacrifice her family and personal life. This true to life novel depicts the difficulty of life and the hurdles one must clear to achieve greatness.

Thea's story begins when she is an eleven-year-old living with her large family in the town of Moonstone. As the daughter of the Methodist minister Thea is well known in her town. She prefers to socialize with the musical Mexicans in Mexico Town and Herr Wunsch a professional musician who has ruined his career with alcohol. Thea takes piano lessons from Wunsch who recognizes a great talent and willingness to work in her. Thea's other supporters include her mother who recognizes that Thea is different from her other six children and has special qualities they don't have. Howard Archie, the town doctor, is also a close friend of Thea's. Archie also recognizes Thea's special talent and intelligence that sets her apart from the other townspeople of Moonstone.

Ray Kennedy, also a friend of Thea's from Moonstone, is the one who gives her the funds she needs to start serious music lessons. Unfortunately Kennedy is killed when his caboose is hit by a train engine. However, he had a life insurance policy which named Thea as the beneficiary. At Kennedy's request Thea uses this money to spend a winter in Chicago taking piano lessons. The next summer, Thea realizes how different she is from her family. After an argument with her sister Thea leaves her home and vows not to return until she has made something of herself.

The following winter Thea takes voice lessons from Madison Bowers, an experience that leaves Thea discouraged and exhausted. Fred Ottenburg sends Thea to spend the summer exploring cliff dwellings at Panther Canon. The experience refreshes Thea. During the summer Thea falls in love with Ottenburg and agrees to marry him. The two travel to Mexico where Thea discovers Ottenburg is already married. As promised Ottenburg takes her to New York where Thea plans to go to Germany to study music. In order for her to afford her studies, however, Thea borrows money from her old friend Archie.

After making a name for herself in Germany, Thea returns to New York to sing. Her old friends Archie and Ottenburg join her in New York to hear her performance. Thea's career is determined by a Mexican who unknown to Thea visits one of her New York performances. The man is Spanish Johnny, a Mexican from Moonstone who recognized Thea's talent when she was just a small girl. The smile on Johnny's face would have let Thea know how useful and full of meaning her life had become.

More summaries and resources for teaching or studying The Song of the Lark.

The Song of the Lark from BookRags. (c)2022 BookRags, Inc. All rights reserved.