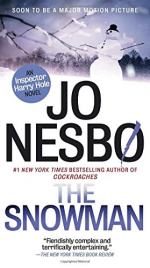 Jo Nesbo
This Study Guide consists of approximately 81 pages of chapter summaries, quotes, character analysis, themes, and more - everything you need to sharpen your knowledge of The Snowman.

This detailed literature summary also contains Quotes and a Free Quiz on The Snowman: A Harry Hole Novel by Jo Nesbo.

The following version of the novel was used to create this study guide: Nesbo, Jo. The Snowman. Vintage Crime/Black Lizard, May 10, 2011. Kindle.

In The Snowman by Jo Nesbo, a serial killer stalked and killed women who had extramarital affairs that resulted in children being born with hereditary illnesses. Katrine Bratt, whose father was suspected of being the Snowman, applied for a job at the Oslo Police Department where famous detective Harry Hole worked. She began to share with him her findings to support Harry’s theory there was a serial killer working in the community. Nesbo winds through twists and turns in the plot before exposing the identity of the real killer and his plans for Harry.

The novel begins with the story in 1980 of a woman who left her young son in the car while she went to visit her lover one last time before he moved away. When the woman returned her son told her that he had seen the snowman and that they were going to die. The story line then fast forwards to 2004 when Birte Becker disappeared from her home. There is another look back in time to the first murder believed to be committed by the Snowman in 1992. Rafto, who investigated the death of Laila Aasen, disappeared during the investigation. Some believed he killed himself, while others believed he was the Snowman and he had gone into hiding.

Back in 2004 Katrine Bratt was hired to work at the Oslo Police Department, the same department where Harry worked. They worked together on Birte’s disappearance and later on Sylvia’s murder. Katrine persuaded Harry to help her follow up on similar cases in Bergen. While they were there the two located the body of Rafto. His body was mutilated to make his face look like that of a snowman, proof that it was the Snowman who killed him.

The investigators tried to track down the killer through the only similarity they could find between Birte and Sylvia. Both women had taken their children to the same doctor. Just as they had come to the conclusion that Idar, the doctor, was the Snowman, Idar was killed. His death was made to look like a suicide, but Harry proved that he was murdered. The attention was moved to Arve, a man who had a hereditary illness and appeared to enjoy sleeping with as many women as possible. He was determined to be the father of both Jonas, Birte’s son, and Sylvia’s twins. Arve was dismissed as a suspect after Katrine attacked him and tried to force a confession.

Because Katrine had gone on her own to confront Arve and then ran away when Harry arrived on the scene, she raised suspicion. Harry had also found in Katrine's apartment the unique kind of paper on which the letter from the Snowman was printed and a file containing the text of the letter was on her computer. Harry tracked Katrine to Rafto’s cabin and arrested her because it was suspected she was the Snowman. Katrine denied being the Snowman. Instead, she said that she wanted Harry to help her find the Snowman.

After Katrine was medicated and came out of her psychosis. she told the police that she was Rafto’s daughter and that she had joined the police department in order to avenge her father’s death. She told them she was not the Snowman.

Meanwhile, Harry has gotten some new clues pointing him in the direction of Mathias, a man who was dating his ex-wife. Harry went to the Anatomy Department where Mathias worked and found the body of Sylvia Otterson, one of the victims, in the storage tanks among other bodies. He arrived at his ex-wife’s house in time to save her from Mathias’ plan for a final murder.

More summaries and resources for teaching or studying The Snowman: A Harry Hole Novel.