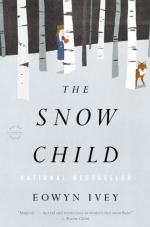 Related Topics
To the Bright Edge of the World

Eowyn Ivey
This Study Guide consists of approximately 76 pages of chapter summaries, quotes, character analysis, themes, and more - everything you need to sharpen your knowledge of The Snow Child.

This detailed literature summary also contains Quotes and a Free Quiz on The Snow Child by Eowyn Ivey.

Mabel encouraged her husband, Jack, to take a chance and move to Alaska so she could get away from the sounds of children, which to her were reminders that she was childless, in the book “The Snow Child” by Eowyn Ivey. When they befriended a mysterious young girl, named Faina, who lived alone in the Alaskan wilderness, Jack and Mabel became surrogate parents for this child. Through their experiences with Faina and the work they dedicated to their new life in Alaska, Mabel and Jack grew closer to one another and their relationship matured. When they lost Faina the two were able to grieve together, something they had not been able to do when they lost their infant son years before.

Mabel was thinking about the death of her only baby when she considered killing herself. She hoped the ice on the river would give way under her weight and she would drown but her suicide attempt was not successful. She returned home, thinking of the way she had planned for she and Jack to work together on their homestead in Alaska. Instead she felt they had drifted further apart. Jack meanwhile dealt with his own problems as he struggled to tame fields for crops and feed himself and Mabel over the winter. He’d just about decided to work in the coal mines over the winter when a neighboring family befriended him and Mabel.

Mabel met Jack at the barn and they played together in the snow the first snowfall. Together they built a snowman that they dressed and decorated like a little girl. Jack got up that night and spotted a young girl in the woods. She had taken the gloves and scarf from the snowman he and Mabel had made. After Mabel saw the girl as well she began to associate the child with the heroine from the Russian fairy tale “The Snow Maiden” that her father had read to her when she was a child. The child, whom they learned was named Faina, refused to stay with Jack and Mabel permanently but visited regularly especially during the winter months. In the summer she went further up the mountains, in order to stay where it was cold. Her behavior so paralleled that of the girl in Mabel’s fairy tale that she believed the child had actually come from the snowman until Jack told Mabel he knew Faina was not a snow fairy because he had helped to bury her father.

For years Mabel and Jack were the only ones who ever saw Faina. Although they had told their neighbor friends about her, the neighbors doubted her existence until they happened to visit the cabin one day while Faina was there. Their son, Garrett, fell in love with Faina. In the course of their relationship, Faina got pregnant. It was when Garrett went to Jack to ask for Faina’s hand in marriage that Jack realized that he and Mabel had become Faina’s parents. Unfortunately, Faina’s childbirth was long and hard. She never fully recovered and soon became sick with a fever. She begged to be taken out in the snow so Garrett fixed her a bed of furs to lie on outside. While outside Faina disappeared. All that remained of her was her clothes still between the furs between which she had been laying. Although they had never been able to comfort each other after the loss of their own baby, Jack and Mabel had matured to the point that they grieved together over Faina’s death.

More summaries and resources for teaching or studying The Snow Child.