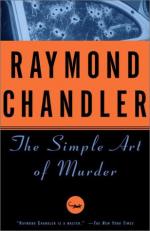 Raymond Chandler
This Study Guide consists of approximately 38 pages of chapter summaries, quotes, character analysis, themes, and more - everything you need to sharpen your knowledge of The Simple Art of Murder.

The Simple Art of Murder Summary & Study Guide includes comprehensive information and analysis to help you understand the book. This study guide contains the following sections:

This detailed literature summary also contains Topics for Discussion on The Simple Art of Murder by Raymond Chandler.

The Simple Art of Murder, by famous American mystery author Raymond Chandler, is a collection of short stories revolving around murders and the criminal world. Centered on the city of Los Angeles and the surrounding area in the 1950s, Chandler's life and knowledge of the criminal underworld was one of intimate familiarity, and nearly all of the stories in this collection involve the film industry and politics in one way or another. In fact, politicians in Chandler's stories are commonly responsible for grave criminal acts, such as blackmail and murder.

The police in Chandler's time were equally corrupt, as many of the characters featured in these stories readily demonstrate. As stated in his essay of the same name, American detective stories were often viewed as second rate, until the introduction of Dashiel Hammet in the early twentieth century, whose attempts at realism helped to change the structure of the American mystery story. Chandler follows this tradition, and is a famous mystery novelist himself, and continues to emulate Hammet in many ways throughout his career.

The stories presented in this collection are best articulated through the understanding of a formula introduced briefly in Chandler's essay. Each story revolves around a crime, which usually consists of a series of murders. The perpetrator is almost always a character well-known to the protagonist, who is almost always a detective with connections to the underground in some way (the notable exception in this collection being "Pearls are a Nuisance," which seems to intentionally flout the structure and tone of Chandler's other stories). This detective usually has a romantic interest, and generally receives help from at least one close confidant, whose life is almost always sacrificed while trying to help the main character figure out who was responsible for the original murder. Bodies tend to pile up quickly in all of the stories, the villains wind up dead, sometimes even from each other, and none of the main characters ever allow the police to deal with matters directly. This is because the world that Chandler has created in these stories runs rife with corruption, so that the only justice the murder victims will ever get comes from the determination of a single detective. These detectives are motivated by a broad and flexible sense of right and wrong, since there is already so much wrong with the world in which they life, but they are determined in their individual quests and always steadfast in helping those they view as innocent or undeserving of the brutal crimes inflicted on them. Their grisly nature sets them apart from British mysteries just as much as their dialogue and dramatic structure, for English mysteries had begun to drift away from plausibility long before Chandler had his start as a writer. This fact marks this collection of a perfect example of early American crime fiction. Although the genre has been carried on by a number of excellent authors since Chandler's time, he remains nonetheless one of the most renowned of all, making The Simple Art of Murder a perfect collection by which to judge the rest.

More summaries and resources for teaching or studying The Simple Art of Murder.

The Simple Art of Murder from BookRags. (c)2022 BookRags, Inc. All rights reserved.