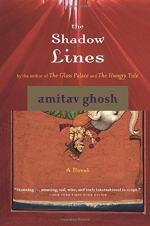 Amitav Ghosh
This Study Guide consists of approximately 36 pages of chapter summaries, quotes, character analysis, themes, and more - everything you need to sharpen your knowledge of The Shadow Lines.

The book is generally comprised of specific anecdotes, and these anecdotes are spread across a chronological period of several decades. Arguably, the earliest significant point in the novel is in 1939, when Tribid and his parents temporarily live in London with the Price family. The novel then relates various important personal and political events at various points throughout these decades. The latest chronological point appears to be the early 1980s. The narrator is about 30 years old, and he goes to London to visit Ila and Nick following Ila and Nick’s honeymoon.

More summaries and resources for teaching or studying The Shadow Lines.