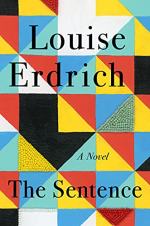 Louise Erdrich
This Study Guide consists of approximately 42 pages of chapter summaries, quotes, character analysis, themes, and more - everything you need to sharpen your knowledge of The Sentence.

The Sentence Summary & Study Guide includes comprehensive information and analysis to help you understand the book. This study guide contains the following sections:

This detailed literature summary also contains Quotes and a Free Quiz on The Sentence by Louise Erdrich.

The following version of this book was used to create the guide: Erdrich, Louise. The Sentence. HarperCollins, 2021.

Louise Erdrich's novel The Sentence is written from both the first and third person points of view, and employs both the past and present tenses. The novel is set in Minneapolis, Minnesota. The novel's narrative present spans the year between November 2019 to November 2020. The following summary relies upon the present tense and adheres to a linear structure.

When Tookie is in her thirties, she is involved with a network of untrustworthy people. Though she is not a young adult, she often behaves like one. She parties hard and uses drugs often.

One day when Tookie's crush, Danae, learns that her lover, Budgie, is dead, Danae asks for Tookie's help. She offers to pay Tookie a large sum of money if she transports Budgie's body from their friend Mara's house back to Danae's. Because Tookie thinks she is in love with Danae, and hopes that the payment will help her restart her life, she agrees. She steals a refrigerated truck from her former employer, and transports the body across state lines. Only a few hours later, Tookie's cop friend, Pollux, arrests her for stealing a body and committing grand larceny. Tookie later learns that because Budgie's body was concealing drugs, she is also being tried for smuggling illegal drugs. She is then sentenced to 60 years in prison.

During her incarceration, Tookie searches for answers. She is pleased, therefore, when her former teacher, Jackie, starts sending her books. Her favorite is the dictionary. The first word she looks up is the word "sentence." In this definition she finds new comfort and clarity regarding her circumstances. After 10 miserable years behind bars, Tookie learns that her sentence has been commuted.

Shortly after her release, Tookie finds a job at a small Minneapolis bookstore. Around the same time, she accepts Pollux's marriage proposal. Over the course of the next four years, Tookie feels content. She believes that her job and her marriage are signs of her reformed life.

Then, in November 2019, Tookie's least favorite customer, Flora, dies. Shortly thereafter, Flora's ghost starts haunting the bookstore. Tookie initially ignores the ghost, comforting herself with the truth that she had nothing to do with Flora's death. However, Flora's ghost soon proves indomitable. She plays tricks on Tookie. She messes up the store, steals books, and trips Tookie. The longer the haunting goes on, the more unsettled Tookie becomes. Though she talks to her friends and coworkers, Jackie, Louise, Pen, and Asema, about the situation, she feels little comfort. She wishes she could talk to Pollux, but knows that he does not believe in ghosts and refuses to talk about the dead.

One day, Pollux picks up his niece Hetta from the airport. Because of Hetta's fraught familial situation, she sees Pollux and Tookie as her parents. They also see her as their daughter. Despite this connection, Hetta and Tookie's relationship is contentious. Tookie dreads her visit, but is pleasantly surprised when Hetta arrives with a new baby and appears completely changed. Over the weeks following, they deepen their relationship and Tookie falls in love with the baby, Jarvis.

In the spring of 2020, the COVID-19 pandemic sweeps across the United States. Tookie and her companions are unsure how seriously to take the virus. They soon feel that death is all around them. Not long later, they learn of George Floyd's murder, and take to the streets in solidarity and protest against police violence. The more unsettled Tookie's external surroundings become, the more emotionally restless she feels.

Meanwhile, Flora's ghost will not go away. Eventually, Tookie realizes that Flora is seeking gratitude from Tookie, and will not relent until Tookie thanks her. Indeed, Flora was a former friend of Tookie's mother, and helped her through her addiction. Tookie and her friends stage a ceremony at the bookstore, and Flora disappears. At the same time, Tookie is struggling to amend her marital difficulties. She ultimately learns how to confront her past mistakes and bitterness in order to grow beyond them.

More summaries and resources for teaching or studying The Sentence.

The Sentence from BookRags. (c)2022 BookRags, Inc. All rights reserved.