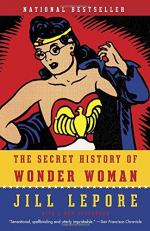 Lepore, Jill
This Study Guide consists of approximately 63 pages of chapter summaries, quotes, character analysis, themes, and more - everything you need to sharpen your knowledge of The Secret History of Wonder Woman.

This detailed literature summary also contains Topics for Discussion on The Secret History of Wonder Woman by Lepore, Jill.

The following version of this book was used to create this study guide: Lepore, Jill. The Secret History of Wonder Woman, 2014. Version 1.

In this non-fiction book, Jill Lepore tells three separate histories that all intertwine and intersect with Wonder Woman, one of the most popular comic book characters of all-time. These histories are the life and family of Wonder Woman creator William Moulton Marston, the history and trajectory of feminist movements in the United States in the early twentieth century, and the actual creation of Wonder Woman herself. Each of these histories are told simultaneously, with Lepore jumping from one area to the other multiple times within every chapter, sometimes without transition. This fluidity is a means for Lepore to highlight how interconnected these seemingly disparate histories are.

The history of William Moulton Marston begins in his childhood, where he was a precocious child who excelled academically. He attended Harvard for his undergraduate degree, studying mainly psychology. It was toward the end of his first tenure at Harvard that, under the tutelage of Dr. Hugo Münsterburg, Marston invented the very first protocol for monitoring someone’s systolic blood pressure as a lie detector test. Soon after undergrad, he married his childhood sweetheart, Sadie Elizabeth Holloway, who had just graduate from Mount Holyoke College. Marston next decided to return to Harvard to study law while Holloway enrolled at Boston University for her law studies (Harvard did not admit women at that time).

After studying law, Marston became obsessed with having his lie detector test become admissible evidence in a court of law. American University in Washington D.C. offered him an appointment and made him head of the very first legal psychology laboratory. Due to not producing many results he was fired from American University. He then received an appointment at Tufts University, where he met an androgynously styled young woman named Olive Byrne, who became his research assistant. Upon Olive’s graduation, Marston was fired from Tufts and she moved in with the Marstons as his second wife. The agreement was that Olive could be Marston’s lover and other wife if she raised the children while Holloway was permitted to continue her professional career.

This arrangement was tenable for everyone, and Marston, Holloway, and Olive all lived together as a single family, claiming to anyone who asked that Olive was their widowed housekeeper. Marston would have two children with Holloway (Moulton and Olive Ann) and two children with Olive (Donn and Byrne). Olive’s children’s father’s identity would be kept a secret from them until adulthood. Holloway consistently worked and was the breadwinner for the family, while Marston shifted career paths frequently. He had failed attempts at advertising, film making, legal counseling, and fiction writing (among others). The Marston’s were not poor but were frequently tight on money due to their large family and only one income. Marston was not only notable for his unorthodox marriage, but he also was a practitioner of sexual bondage and even held meetings with friends and family to explore how to make sex more pleasurable for a woman.

A history of feminist movements in the United States run parallel to the other accounts. When Marston was a freshman at Harvard, famed suffragette Emmaline Pankhurst was banned from speaking on campus which caused a national news story. This incident was what first piqued Marston’s interest in feminism. Lepore recounts the early suffrage movements in the United States and briefly details the lives and contributions of various feminist cartoonists and activists such as Lou Rogers, Henry Peters, and Andonica Fulton.

The most in-depth feminist narrative is that of Margaret Sanger: a birth control advocate, founder of Planned Parenthood, and aunt to Olive Byrne. Olive’s mother, Ethel, and Sanger were arrested in the 1910s for distributing contraceptive devices in the New York City. This sparked Sanger’s decades long fight for the public accessibility of birth control as a cornerstone of female equality. Sanger’s book, “Women and the New Race,” advocated not just for female equality, but also purported female superiority. This book would greatly influence Marston and become the philosophical basis for Wonder Woman. Though Sanger was Olive’s aunt, she rarely spent time with Marston and never conversed about feminism, as the Marstons were afraid she would find out about their unconventional marriage arrangement.

The third history explored by Lepore is the actual creation of Wonder Woman. Having been out of work for years, Marston decided to pursue a job in the comics industry as the medium was rapidly rising in popularity. He was first hired by M.C. Gaines, head of National Publications (later known as DC Comics), as a psychological consultant. He pitched the idea for Wonder Woman as a symbol of female empowerment and superiority. Her roots as an Amazonian princess were a popular story trope at the time but Marston intended use Wonder Woman as a vehicle for his personal, some might say twisted, worldview.

The largest issue Marston ran into was backlash against his excessive use of bondage in the comics he wrote. Wonder Woman, or another female character, is shown tied up and bound in chains on almost every single page of every single issue. Marston claimed he did this as a reference to the “breaking from the bonds of society” imagery popular of political cartoons of the suffrage era, but many believed the references were sexual in nature. Marston believed bondage to be the truest display of love and passion. This was extreme at the time, causing many of his stories to be rejected for being too salacious.

Wonder Woman became one of the most popular comics in the United States, only rivaled by Batman and Superman in overall sales. This led to unprecedented prosperity for the Marstons. In 1945, only a few years after he created Wonder Woman, Marston contracted polio and then died of cancer two years later in 1947. Holloway attempted to take over the Wonder Woman comic but was rejected. Instead, Wonder Woman was put under the purview of Robert Kanigher, who stripped Wonder Woman of her feminist sensibilities and made her into a stereotypical helpless female. Wonder Woman, along with many other comic characters, faded into obscurity in the 1950s due to the public backlash against the purported deleterious effects reading comics can have on a child’s psyche.

Wonder Woman would re-emerge as a cultural icon in the 1970s through the new wave of feminist movements. Wonder Woman was featured on the cover of the first issue of feminist publication “Ms” magazine and the magazine published collections of Wonder Woman’s early, more feminist driven, adventures. Wonder Woman’s legacy and impact continues to this day. Lepore closes the book by arguing Wonder Woman’s impact on feminism could have been even greater had her roots not been kept so secretive due to fear that the Marstons and their lifestyle would be found out. Wonder Woman is feminism and feminism is Wonder Woman, but this fact, according to Lepore, was obscured due to the secret life of her creator.

More summaries and resources for teaching or studying The Secret History of Wonder Woman.