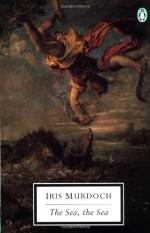 The Sea, the Sea Setting & Symbolism

The mirror is the first of two objects, left behind by the previous owner of Shruff End that define Charles' state of mind/being as his tormented summer begins and foreshadow the process of transformation he undertakes during that summer. The mirror shows Charles his own image, meaning that when it mysteriously shatters it simultaneously foreshadows and represents the shattering of his self-image as controlling and all powerful.

The vase is the second of the two objects left behind in Shruff End. In its exotic ugliness, the vase represents the equal ugliness of Charles' attitude towards and treatment of women, which means that when it shatters it too is a simultaneous foreshadowing and symbol. In this case, it represents the way Charles learns he can no longer control and manipulate women in the ugly way he did before.