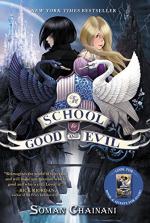 The School For Good and Evil Summary & Study Guide

Soman Chainani
This Study Guide consists of approximately 61 pages of chapter summaries, quotes, character analysis, themes, and more - everything you need to sharpen your knowledge of The School For Good and Evil.

The School For Good and Evil Summary & Study Guide Description

The School For Good and Evil Summary & Study Guide includes comprehensive information and analysis to help you understand the book. This study guide contains the following sections:

This detailed literature summary also contains Quotes and a Free Quiz on The School For Good and Evil by Soman Chainani.

The following version of this book was used to create this study guide: Chainani, Soman. The School for Good and Evil. Harper, 2013. Paperback.

The story begins in the town of Gavaldon, where a beautiful girl named Sophie prepares to be kidnapped by a mysterious being known as the School Master. Every four years, a ghost-like figure appears in the town and kidnaps two children - one good, and one evil. Then, every year, the town mysteriously receives four fairy tales, and the children recognize the characters as the children that were kidnapped. It is Sophie’s dream to become a fairy tale princess and have a prince of her own. She goes to visit her friend Agatha who lives in the graveyard. Sophie believes they will be kidnapped together. That night, Sophie’s wish comes true, and Agatha tries to stop her by jumping on. They end up together at the School for Good and Evil. however, Agatha is dropped in the Good Tower, while Sophie is dropped in the Evil Tower. The two girls try to swap sides, but they are told that the School Master does not make mistakes.

The next day during the welcoming ceremony, Sophie sees Tedros for the first time and immediately falls in love. They learn about the various rules of the school, as well as the three major events that will happen throughout the year: The Trial by Tale, The Circus of Talents, and the Snow Ball. Classes begin and while Agatha fails to act like a princess, Sophie ranks 1st in all of her classes. However, when Agatha goes to Animal Communication class, she causes a Wish Fish to turn into a human. This lead the other animals to stampede, chasing Agatha all the way to the top of the Good tower. There, she learns the gargoyles that protect the school are also previous humans, but Tedros strikes the Gargoyle down, believing that it is attacking Agatha.

A few days later, Agatha is called into the headmistress's office. She believes she is going to be failed out of school. However, she learns from Professor Dovey that she received high marks from her Animal Communication class and will continue in the School of Good. Meanwhile, Sophie continues to do well in her classes, despite her best efforts. In the Surviving Fairy Tale class, Agatha and Sophie are placed in a group with Tedros, Beatrix, and Sophie’s roomates. Their teacher turns Agatha and Sophie into hobgoblins and forces Tedros to pick the Good between the two. He picks Agatha, causing Sophie to attack and eventually leading to a magical punishment. From there, Sophie finally decides she wants to go home.

The two fly to the School Master’s tower, where he tells him that the Storian - a magical pen that writes fairy tales - has begun writing their story. He cannot change anything and they must live out their story. He gives them a riddle - what is something good always haves that evil can never have - and sends them on their way. Later that week, Agatha makes friends with Kiko, who tells her that every girl must be invited by a boy to the snow ball, or they will instantly fail. Agatha then goes to the Gallery of Good - a place where many trinkets of famous fairy tales are housed - and sees paintings of Gavaldon under attack as well as all the missing children. She learns that the painter, Professor Sader, is blind. Meanwhile, Sophie learns that there were originally two School Masters, one Good and one Evil. They got into a battle with each other, and no one knows who won. However, it is assumed it was the Good School Master, as Evil has not defeated Good once in 200 years.

The professors call a school wide assembly where they assure everyone that no one has seen the school master. Sophie and Agatha refute this, and are punished. Agatha is locked in her room, and Sophie is sent to the Doom Room. In the Doom Room, the Beast chains Sophie up and chops off her hair. He then lets her go, and she pushes him into a flowing stream, drowning him. Meanwhile, Agatha begins reading Professor Sader’s books, and realizes the answer to the School Master’s riddle. Sophie returns to her class just before being sent through the Flowerground, a complicated, underground network that leads them to a graveyard. While there, she too realizes the answer to the School Master’s riddle. She flies to Agatha and they decide that they must make Tedros fall in love with and kiss Sophie. Tedros, however, has no girl that he wants to invite to the Snow Ball.

At Surviving Fairy Tales, Tedros is once again asked to choose a Good student between a dozen of matching, ugly corpses. He chooses Agatha, but she knocks him out before he knows it and swaps the coffins to make him think he choose Beatrix. Meanwhile, one of Sophie’s roomates, Hester, decides to help her come up with a love potion to use on Tedros. Sophie believes that Agatha tricked Tedros and decides to try and do things on her own. This leads to her eventually trying to shoot him with a love bullet. However, this fails because she is not allowed to use magic before the Unlocking. A scarlet F appears on her clothes and she leaves. Agatha tells her to show him the real Sophie.

Sophie begins to turn her ugly uniform into a variety of dresses and teaches classes on beauty to the Nevers. Although she is continually skipping classes, the teachers are unable to fail her. Even Tedros is impressed, as she is giving Nevers hope. However, it is revealed she is the lowest rank in class, and she loses all of her followers. To help, Agatha begins skipping her own classes and going with Sophie disguised as a cockroach, giving her all of the answers. Eventually, Sophie arrives to rank one and her classes begin again. She meets Tedros alone in the forest, but decides not to kiss him, enraging Agatha.

Sophie is chosen for the Trial by Tale, and both Evers and Nevers want to kill her. Tedros promises that they will work together to win and prove that she is Good. However, she fails all of her pre-trial challenges and is forced to enter the arena three hours before Tedros. She survives with the help of Agatha, but refuses to defend Tedros against Hester. Agatha saves Tedros’ life, causing Tedros to realize that Sophie has been cheating and lied to him.

After the Trial, Sophie begins to have nightmares that her professor calls Nemesis dreams. When Agatha tries to visit her, Sophie blames her again for Tedros’ negative response and tells Agatha to get her own life. Tedros never told anyone that Agatha saved him. The Evers begin to suffer random attacks, such as stingrays in the pool and rash powder in their clothes. Sophie reveals she is responsible for the attacks because Tedros refuses to invite her to the Snow Ball. In the Good Deeds class, Agatha is the only one to get 100% on her exam and speaks with Professor Dovey after class. The professor reveals herself as Cinderella’s Fairy Godmother and lets Agatha wish for beauty. When Agatha wakes up, she feels beautiful, but later realizes that it is not her physical appearance that has changed, but how she feels about herself.

After finding one of Sophie’s roommate's Dot in the Ever bathroom after being kicked out by Sophie, Agatha finds a tunnel between the two schools and confronts Sophie. She tries to convince Sophie to stop the attacks, but Sophie is determined that Tedros keep his promise. The two end up falling in the stream and are thrown out into the forest outside the school. Tedros finds Agatha before Sophie runs up to them both. Tedros tries to ask Sophie out to the Ball, but sees her reflection as an evil, ugly witch. He goes back to Agatha, and defends her after Sophie screams that Agatha is the witch instead of herself.

The Circus of Talents begins and, after many Evers and Nevers face off, Agatha takes the stage and reveals that the guard wolves and fairies, working for Evil and Good respectively, are actually transformed former students of the opposite school that failed. Tedros declares her the winner, but Sophie appears. Tedros invites Agatha to the ball, enraging Sophie that she sings so loud that Ravens attack and kill all but one of the wolves and fairies. The crown chooses her and both sides rush to escape the Theater as it changes to the Evil side. Sophie sings ever higher, sending Evers crashing down and scrambling for a ledge. Agatha tackles Sophie but the later returns and attempts to kill Agatha by throwing her out of a window. Agatha survives thanks to the lone surviving fairy, and a now ugly Sophie disappears.

Tedros decides he wants to attack the Nevers and Sophie. Agatha convinces him to wait. Meanwhile, Sophie returns to her room and her roommates quickly lock her inside. However, Sophie has already prepared a plan and invites all the Nevers to go to the Evil Hall. Meanwhile, Beatrix tells Tedros the Nevers are going to attack, and knocks out Agatha to stop her from protesting. When Agatha wakes up, she rushes to get to the Evil Tower. With the help of Sophie’s cupid henchman Grimm, Agatha arrives at the Evil Hall before the Evers, realizing that they were throwing a ball. Hester decides to let Sophie out, and Sophie convinces Agatha to dance with her to prove that Good and Evil can be together. However, when the Evers arrive, Sophie tells Tedros that Agatha was on the Evil side, prompting him to shoot an arrow at her. Sophie stops the arrow with magic. This causes her and the Nevers to turn beautiful, while the evers turn ugly. This causes a war between the two while Sophie decides to climb the School Master’s tower so she can write her own ending.

Once Sophie reaches the top of the tower, she finds it has been set up as if for a wedding. The School Master reveals that he is a handsome young man and the Evil of the two brothers. His Good brother placed a spell on the Storian, causing Good to succeed in every story. The Evil School Master wants to marry Sophie, but when they kiss they both begin to decay. Sophie regrets everything she has done. Agatha saves her by pulling them both out of the tower and into the river. A magical wave returns them to the battlefield where the School Master attempts to kill Agatha with the Storian. Sophie takes the hit instead, and Professor Sader absorbs the spirit of the Good headmaster who transforms into a Swan and kills his brother. Sophie dies in Agatha’s arms but is revived after the latter kisses her. However, as both schools of students approach them, the two girls disappear.

More summaries and resources for teaching or studying The School For Good and Evil.

The School For Good and Evil from BookRags. (c)2022 BookRags, Inc. All rights reserved.