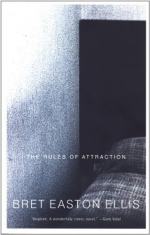 Bret Easton Ellis
This Study Guide consists of approximately 31 pages of chapter summaries, quotes, character analysis, themes, and more - everything you need to sharpen your knowledge of The Rules of Attraction.

The Rules of Attraction Summary & Study Guide includes comprehensive information and analysis to help you understand the book. This study guide contains the following sections:

This detailed literature summary also contains Topics for Discussion and a Free Quiz on The Rules of Attraction by Bret Easton Ellis.

Rules of Attraction by Bret Easton Ellis is a look at life on the college campus in 1985. Ellis uses the tools of humor and pathos to tell his story doing so quite effectively. The story takes place in an unnamed university in Camden, NH (non-existent). The story epitomizes the phrase sex, drugs and rock and roll—throwing in liquor for good measure. Although the touches of humor are quite appealing, there is the expected tragic edge that over-indulgent existences ultimately herald in. The plot is driven on the premise that most people want who they cannot have. As the character Gerald tells Paul, "No one ever likes the right person."

Among the dozens of young students the reader meets, there are three main characters. Sean Bateman is a senior who has changed majors multiple times. To say he is non-serious would be one a considerable understatement. He was surprised when his mentor advised him that he was failing only three of his four classes. Sean is constantly in search of the next girl, drink or drug that he can use and abuse. He is a self-described financial aid student who supplements his cash flow acting as a small-time middle man for a townie drug dealer. Sean perpetually owes money to Rupert the drug dealer, who is constantly threatening Sean to pay up. In reality, Sean is from a wealthy family and and experienced an upper-crust lifestyle including a tony boarding school education. Sean conceals his wealth from his classmates. He could easily pay off the menacing drug dealer but refuses to do so.

Sean goes from one girl to another, eventually focusing on Lauren. Sean mistakenly thinks Lauren is the mystery girl leaving anonymous love notes in his mail box. Sean is immature and does not know the importance of fidelity or consideration for the other person's needs. When Sean's failures in his personal and school lives pile up on him, he makes a few lame attempts at suicide. Sean doesn't want to end his life but doesn't know how to straighten it out.

Lauren Hynde is another non-serious senior who has fluctuated between Poetry and Art as majors. She is stoned and/or drunk most of the time, dulling any concern she may have about her unabashed promiscuity. Lauren has a shallow relationship with Sean, who is a shallow man. Throughout most of the story, Lauren is pining away for her one true love, Victor. For most of the story, Victor is away traveling across Europe. Lauren is sad and depressed that he has not called her. She makes lame excuses for his lack of communication, envisioning him as sad and lonely without her and unable to get through to her on the phone. Eventually she is shocked when he calls her residence hall, does not recognize her voice and asks for another girl.

Paul Denton is a drama major and is a little more serious at his studies than many of the other students. Paul is bi-sexual but most of his interest during the chronology of this story is in men. Paul is very hurt when he is overthrown by Mitchell for a Freshman girl. Next, Paul pursues Sean, who is pursuing Lauren. Paul's relationship with Sean is one-sided as Sean doesn't give Paul a serious thought. Though Paul is in hot pursuit of Sean, he really sees Sean as boring and humorless. Even though Paul is good looking and charming, he does not have good self-image. He sets the bar low for others and pursues people who do not return his feelings. Paul is promiscuous and is drawn to young, good-looking men. He is from a well-to-do family and just learns that his parents are divorcing.

More summaries and resources for teaching or studying The Rules of Attraction.

The Rules of Attraction from BookRags. (c)2022 BookRags, Inc. All rights reserved.