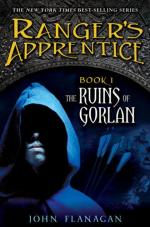 John Flanagan (author)
This Study Guide consists of approximately 30 pages of chapter summaries, quotes, character analysis, themes, and more - everything you need to sharpen your knowledge of The Ruins of Gorlan.

The Ruins of Gorlan Summary & Study Guide includes comprehensive information and analysis to help you understand the book. This study guide contains the following sections:

This detailed literature summary also contains Topics for Discussion on The Ruins of Gorlan by John Flanagan (author).

Book 1 of the Ranger's Apprentice, "The Ruins of Gorlan" by John Flanagan is about a boy who starts his journey into manhood in the fantasy world of the Kingdom of Araluen. Will is an orphan who learns about his past and his parents, while coming of age in a kingdom on the verge of war. He learns about himself and his friends as he finds his place within the kingdom.

Lord Morgarath, Lord of the Mountains of Rain and Night, tried to overtake the Kingdom of Araluen fifteen years ago. He is now plotting his revenge against the men who thwarted his plan so that he can attempt another takeover. He is using vicious creatures he found in the Mountains to exact his plans.

Fifteen years before, Will was left on the doorstep of Redmont Castle with a note that said that his mother died in childbirth and his father died a hero. Will does not know who his parents are and is bullied and feels ashamed for not knowing. Will has remained in the castle under the care of Baron Arald and now at fifteen he is asked to choose the profession he wishes to pursue. The Baron calls this Choosing Day and the wards choose what Craftsperson to whom they choose to be apprenticed.

Horace, the ward mate who bullies Will, is accepted into Battleschool. Will is jealous of him and wishes it was him. The two have never gotten along, and Will is happy to get away from him.

Will believes that he will be relegated to work in the fields, but Halt, a Ranger, asks Will to be his apprentice. The Ranger Corp is a group of fifty men who watch over the Kingdom of Araluen. They keep it safe from enemies and act as spies for the kingdom. Halt has watched over Will because Will's father saved his life during the war with Lord Morgarath.

Halt helps Will realize that being a Ranger is his calling and that he has great skill at it. Will proves this when he saves Halt's life from the Kalkara that Lord Morgarath has sent to kill him. This encounter makes Will realize that being a Ranger is what he is meant to be and he passes up the opportunity to join the Battleschool when asked by Baron Arald and Sir Rodney.

Will and Horace become formidable allies. Horace is a genius with a sword and overcomes bullying by his classmates and sees how he treated Will. Will saves his life from a boar attack and Horace sees what kind of person Will is. Horace returns the favor when he saves Will from the bullies who had been assaulting him. Halt helps Horace have the opportunity to take the three boys on one by one and Horace gets his revenge on the three boys who have made his life miserable.

Will and Horace have pains following their paths into manhood, but they overcome them. Some pains they overcome together and some on their own. There is also more adventure for them on the horizon as the onslaught of Lord Morgarath will hardly end once the Kalkara have been defeated. The Kingdom of Araluen prepares for war.

More summaries and resources for teaching or studying The Ruins of Gorlan.

The Ruins of Gorlan from BookRags. (c)2022 BookRags, Inc. All rights reserved.