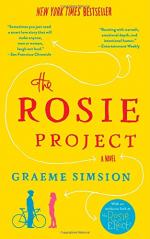 Graeme Simsion
This Study Guide consists of approximately 56 pages of chapter summaries, quotes, character analysis, themes, and more - everything you need to sharpen your knowledge of The Rosie Project.

This detailed literature summary also contains Quotes and a Free Quiz on The Rosie Project by Graeme Simsion.

The Rosie Project is the story of Don Tillman, an associate professor of genetics at a major university in Melbourne, Australia. Don has Asperger's syndrome which is a form of autism which has created characteristics in him that limit his success in social interactions. Because of this, Don has had many dates but never two with the same woman. Don is 39 years old and would like to be married so, typical to his scientific style, he develops a questionnaire for women to complete to determine whether they would be good wife material. As Don goes about administering his questionnaire, his best friend, Gene, also a university professor sends a girl named Rosie Jarman his way. Don determines right away that Rosie is not a viable candidate for his Wife Project but he is taken in by Rosie's story of wanting to find her biological father. Rosie's mother died when Rosie was small and she was raised by her mother's boyfriend, Phil, whom she claims never loved her and raised her strictly out of duty.

Don and Rosie set out to capture the DNA of possible candidates who could be Rosie's father and the project ultimately sends them to New York City where the two of them become more interested in each other romantically. Don finds that he is able to drop some of his pre-qualifiers and entertains the possibility that Rosie could be a special person in his life, however due to the Asperger's, Don is unable to express emotion and Rosie feels that her feelings for him cannot be reciprocated.

Don works out a mental process of caring for Rosie and they soon marry, each knowing the special characteristics of the other. Don and Rosie move to New York where Don teaches at Columbia University and Rosie is enrolled in the school's medical sciences program. Don is able to prove that Rosie's father was a medical school classmate of Rosie's mother's, and Rosie has some closure on her past.

More summaries and resources for teaching or studying The Rosie Project.