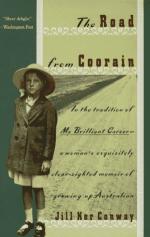 The Road from Coorain Summary & Study Guide includes comprehensive information and analysis to help you understand the book. This study guide contains the following sections:

This detailed literature summary also contains Topics for Discussion and a Free Quiz on The Road from Coorain by Jill Ker Conway.

The Road from Coorain is the autobiography of Jill Ker Conway, a native Australian, historian and the first female president of Smith College. Conway was born in 1934 in Hillston, New South Wales, in the "bush," or Australian "outback," to parents who operated a large sheep station that they named Coorain. Conway had two older brothers, Bob and Barry. While her life in the bush was not filled with other children, she was still happy, social and able to pursue her interests. Her mother, an avid reader and self-educator, taught Conway to read at an early age and Conway read voraciously as a child. She also became familiar with the hard chores required to maintain Coorain.

Conway's parents had taken a risk with Coorain, which had struggled because they had founded it at the beginning of the Great Depression. However Coorain began to flourish and Conway became an integral part of the workforce. When Conway was six, a massive drought began in the bush that lasted for seven years. Conway's father's dream had always been to own and operate a country farm like Coorain; he could not psychologically handle the stress of watching his lifetime investment die before his eyes. In 1944, Conway's father died and appeared to Conway to have killed himself.

The family was devastated by Conway's father's death but her mother would not sell Coorain. Yet three more years without sufficient rain forced Conway's mother, Bob, Barry and Conway into Sydney. Conway's brothers were already used to formal schooling, but Conway was not and found life in Sydney schools difficult at first. Eventually she gained admittance to Abbotsleigh, an elite private girls' school, where she finally started to feel comfortable. Conway also pursued her education avidly, graduating and going to the University of Sydney. She would graduate with honors in history and English in 1958. At college she developed a deep passion for history, particularly for Australian history, along with an interest in the social barriers faced by women in her day.

While Conway was in school, her brother Bob died in a car accident, further devastating their family but particularly devastating Conway's mother. Afterwards, Conway's mother became increasingly interested in the paranormal and developed an alcohol and tranquilizer addiction which made her behavior increasingly volatile. Conway felt obligated to care for her mother, given that her father had charged her with her mother's care before his death. However, through her studies she realized that her mother was manipulative and controlling. After a trip to England and Europe with her mother, Conway decided that she would simply leave Australia and study Australian history at Radcliffe College.

The Road from Coorain is 238 pages and is divided into nine chapters with an uncomplicated chronological structure. It ranges from before Conway was born (giving the necessary background on her parents) to 1960, when Conway is twenty-five. The book was published in 1989.

The Road from Coorain from BookRags. (c)2022 BookRags, Inc. All rights reserved.