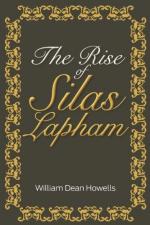 William Dean Howells
This Study Guide consists of approximately 45 pages of chapter summaries, quotes, character analysis, themes, and more - everything you need to sharpen your knowledge of The Rise of Silas Lapham.

The Rise of Silas Lapham Summary & Study Guide includes comprehensive information and analysis to help you understand the book. This study guide contains the following sections:

This detailed literature summary also contains Topics for Discussion and a Free Quiz on The Rise of Silas Lapham by William Dean Howells.

The novel "The Rise of Silas Lapham" is the story of a man's rise to high moral standards even as his prosperity diminishes and he finds himself facing financial ruin. The side themes of a mistaken love, the construction and destruction of an expensive home and the bad dealings of a former partner are among the subplots that are woven masterfully into the main theme of the novel. Through all of their troubles, the Lapham family manages to stay together and stay strong in their family bonds. Even though they lose their money and physical possessions, they maintain their dignity.

Soon after meeting the Corey family and believing that Tom Corey is interested in marrying Irene, Lapham's youngest daughter, the Laphams become dissatisfied with their situation in life. They decide to build a fine home in an affluent neighborhood as a way to break into this society. As they are in the process of building, a ghost from Lapham's past in the form of his old partner emerges. Lapham's wife remembers her belief that Lapham split with this partner out of greed and a division forms between the husband and wife.

Lapham seems on his way to breaking into Corey's social rank when the young man asks for a position in Lapham's office. At about this same time Rogers comes to Lapham's office asking for money and Lapham lends it to him. This action heals the rift between Lapham and his wife. In addition, the Lapham family is also invited to dinner at the Corey's home, an invitation which they seem to believe will change their futures.

It is at this time, that Lapham's luck in life seems to turn. Paint sales are down and he is forced to shut down the Works. Rogers has also come to him again and again asking for money. Each time Lapham has tried to help him but soon realizes the man is a liar and a thief. Lapham is also being pressed by Molly Millon, the wife of a war friend who took a bullet for Lapham, for more money. In addition, the entire Lapham family had believed Corey was interested in Irene when instead it was her sister Penelope he was in love with. This discovery causes a rift between the sisters and a great deal of sorrow for all involved. Finally, Lapham has just received an offer to buy the new house he has been building when the house burns down in a freak accident.

At this completely rock bottom time of his life, Lapham is forced to sell his business to a West Virginia pain company. Lapham also sells his family's Boston home and relocates his family to his old family homestead in Vermont. Despite his hardships, however, Lapham prides himself in never having hurt anyone but himself. Even when faced with the possibility of being able to sell some worthless property at a great profit which would have saved his business, Lapham turns down the offer because he knows how much the deal would hurt others. In the end of the book Penelope ends up marrying Corey who lives out his dream of selling paint in foreign countries through the West Virginia paint company. Although Lapham is no longer rich and has not become part of the highest rank of society, he is happy with his own decisions in life.

More summaries and resources for teaching or studying The Rise of Silas Lapham.

The Rise of Silas Lapham from BookRags. (c)2022 BookRags, Inc. All rights reserved.