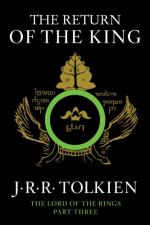 The Return of the King Summary & Study Guide

J. R. R. Tolkien
This Study Guide consists of approximately 36 pages of chapter summaries, quotes, character analysis, themes, and more - everything you need to sharpen your knowledge of The Return of the King.

The Return of the King Summary & Study Guide Description

The Return of the King Summary & Study Guide includes comprehensive information and analysis to help you understand the book. This study guide contains the following sections:

This detailed literature summary also contains Topics for Discussion on The Return of the King by J. R. R. Tolkien.

In the third and final volume of J.R.R. Tolkien's The Lord of the Rings trilogy, the battle for Middle-earth comes to an end.

The Return of the King picks up where The Two Towers leaves off. The Darkness begins to issue from Mordor, soon hiding the entire sky over Minas Tirith. Aragorn realizes the Riders may not reach the city in time to defend it against conflict with Mordor, so he decides to take the Paths of the Dead to reach Gondor. Accompanied by Legolas and Gimli, a huge army of the Sleepless Dead follows him southward.

In Gondor, Denethor sends Faramir to hold off the armies of Mordor at Osgiliath. They hold position as long as they can, but must ultimately give up the field, even with Gandalf’s help. As they are retreating to the city, Faramir is hit by a poison arrow, but it does not kill him. Denethor locks himself in a crypt with Faramir, planning to destroy the remnants of the line of Gondor’s Stewards.

The army of Mordor nearly breaks through the defenses of Minas Tirith, but the Riders arrive just in time. The Black Captain kills King Theodon, and Lady Eowyn and Merry kill the Black Captain heroically; however, Lady Eowyn is severely injured. The Mordor forces regroup, but Aragorn arrives.

Pippin finds Gandalf, and together they keep Denethor from killing Faramir. Denethor kills himself instead. Aragorn enters Minas Tirith and heals those who were injured by the Black Captain during battle. This fulfills the prophecy about the coming of the next king of Gondor.

The leaders of the armies of the West decide to distract Sauron from Frodo by launching an assault on Mordor. Aragorn’s forces march to the Black Gate of Mordor and confront Sauron’s lieutenant. The armies of Mordor are released.

Sam manages to rescue Frodo from the tower of Cirith Ungol. The Hobbits disguise themselves as Orcs to trek through Mordor, and with each step, the Ring is heavier and heavier around Frodo’s neck.

Sam and Frodo reach Oroduin, or Mount Doom, and Sam carries Frodo to the top. When they reach the Cracks of Doom, Frodo refuses to give up the Ring because he is overcome by its power. Gollum appears and struggles with Frodo before biting the Ring off Frodo, along with his finger, and falling into the Cracks of Doom.

Sauron’s power is broken, and Aragorn’s forces at the Black Gate defeat the armies of Mordor. Gandalf flies to Oroduin on the back of Gwaihir to rescue Sam and Frodo. The Darkness dissipates from Gondor. Aragorn is crowned King of Gondor and marries Arwen. Minas Tirith and the surrounding areas begin to recover.

The Hobbits return to the Shire to find their homes ravaged by the police state set up by a group of Men. The four companions organize a rebellion to get rid of the oppressors, discovering that Saruman was behind it, seeking revenge against the Hobbits. Saruman is betrayed and killed by Wormtongue.

The Hobbits rebuild the Shire and return to their ordinary lives. Sam starts a family. Frodo decides to leave the Shire, so he joins Gandalf, Bilbo, and the other Ring-bearers to sail across the Great Sea to the peaceful paradise in the unknown West.

More summaries and resources for teaching or studying The Return of the King.

The Return of the King from BookRags. (c)2022 BookRags, Inc. All rights reserved.