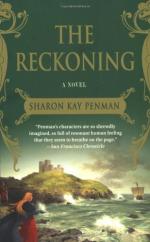 The Reckoning Summary & Study Guide includes comprehensive information and analysis to help you understand the book. This study guide contains the following sections:

This detailed literature summary also contains Topics for Discussion and a Free Quiz on The Reckoning by Sharon Kay Penman.

The Reckoning by Sharon Kay Penman is a work of historical fiction detailing the relationship between England and Wales between the years of 1271 and 1283. The novel begins in the Evesham Abbey in England in January of 1271, five years after Simon de Montfort dies in the battle of Evesham. Simon de Montfort is the Earl of Leicester, and brother-in-law of the English King Henry. He rebels against the king and is defeated by the king's son, Prince Edward. Prince Edward ascends the throne of England after his father's death and is called the greatest warrior in all of Christendom because of his defeat of the brilliant militant Simon de Montfort.

King Edward rules England from the shadows, impatiently waiting for King Henry's death. When he finally takes the throne, he seeks to expand England's borders. He rules England as a tyrant; cruel, cunning, and viewed by all as empowered by God's blessings. Generations of English kings have sought to capture bordering Wales and Edward soon declares war there as well.

The Prince of Wales, Llewelyn ap Gruffydd, holds a tentative grip on his lands and people. Wales is an autonomous kingdom with its own customs and laws, misunderstood by the English government. Unlike England, Welsh law divides inheritance between the sons and even recognizes illegitimate heirs. This custom fosters fratricide when the brothers are unable or unwilling to share, and divides the land of the royal house into fragments ruled equally by brothers. Llewelyn is the victim of brotherly jealousy after the death of his father, and must defend his claim against three brothers. Llewelyn is victorious, but his family is splintered. Loyalty from the Welsh people is hard to win because of conflicting powers, but following the guidance of his grandfather, Llewelyn inspires his people to unite against the English invasion.

Llewelyn ap Gruffydd fights three wars against England. His life is in a constant state of war. Since he has declared himself Prince of Wales, his life has been consumed by planning for, fighting, or recovering from war. He finds victory in his first war and sees the borders of Wales grow to where they were during the reign of his grandfather. However, the victory is short lived. During the second war, King Edward is aided by Llewelyn's brother Davydd, and Llewelyn is forced to surrender. Border lands are once again controlled by England, and Llewelyn watches his life's work crumble. Thirty years of struggle and fighting for nothing. England takes back all Llewelyn has won.

Llewelyn's surrender is made a little sweeter because King Edward allows him to meet and receive his bride into Wales. Edward has been holding Llewelyn's wife as a hostage, a wife Llewelyn loves but has never seen, as leverage during the war. After Llewelyn's surrender, he takes his wife to his home in Wales and attempts to live as a proper English vassal. Davydd, King Edward's ally in the second war, now seeks to join with Llewelyn to return their sacred Wales to its former glory. Another war is inevitable, but Llewelyn develops a strategy that involves waiting until the right time to rebel against the Crown. Davydd disagrees. The third war begins and Llewelyn is killed in battle. Davydd becomes the last true Prince of Wales, a title he holds only a short time before being executed by King Edward for treason. After Davydd, the title Prince of Wales is reserved for the heir to the English Crown.

The Reckoning from BookRags. (c)2022 BookRags, Inc. All rights reserved.