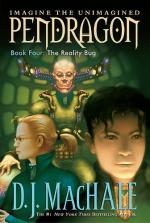 D. J. MacHale
This Study Guide consists of approximately 36 pages of chapter summaries, quotes, character analysis, themes, and more - everything you need to sharpen your knowledge of The Reality Bug.

The Reality Bug is a young adult science fiction/fantasy story in a series of books about a fifteen-year-old boy named Bobby Pendragon and his friends. The story is set in a universe with multiple parallel worlds that can be accessed through gateways called flumes. Bobby must travel to the various worlds, known as territories, to do battle with the evil Saint Dane. Helping him are other people who can do this, called Travelers. All the Travelers have helpers, known as acolytes, on the various territories.

Bobby starts his adventures by going to the territory of Veelox, where he meets Aja Killian, a pretty and smart young woman slightly older than Bobby. He learns that the people of Veelox have become addicted to Lifelight, a computer-enabled virtual reality that gives the people very benign fantasies. Their physical bodies are kept within a high-tech pyramid in which they lay while the computer generates their fantasies from their actual memories. Meanwhile, the evil Saint Dane, the antagonist, has claimed that he has already conquered Veelox. Aja believes she has thwarted him.

While Bobby goes about helping Aja, his two friends on his home territory of Second Earth, Mark Dimond and Courtney Chetwynde, start high school. Both have a hard time of it, but Courtney suffers the most as her career in sports degrades to an intolerable level. Mark has decided that he wants to become an acolyte, and he hopes Courtney will do the same.

Back on Veelox, Aja installs the Reality Bug, a program enhancement designed to make the fantasies of those in the pyramid, called jumpers, too realistic to tolerate. The plan is that this will cause the people of Veelox to return to their normal lives, thereby defeating Saint Dane's evil plan. At first this seems to work, but then the Reality Bug becomes a monster that leaves the fantasy world and enters the real world. Bobby and Aja meet Dr. Zetlin, the inventor of Lifelight, and convince him to entirely shut down the pyramid, of which there are many scattered about Veelox. Shutting down this one turns off them all, and doing this destroys the Reality Bug.

Thinking that they had won, Bobby attends a general meeting in which the head Director of Lifelight declares that it will be back up and running. Zetlin had expressed hope that the people of Veelox would return to their normal lives in reality, but this announcement sends them back to the pyramids and their fantasy lives. In the end, Aja and Bobby are defeated by Saint Dane, who gloats about having attained his first victory over the Travelers. By the end of the story, Mark and Courtney have become acolytes, Bobby is having a horrible time with Saint Dane, Aja has admitted to her defeat, and the story will be continued in the next book of the series.

More summaries and resources for teaching or studying The Reality Bug.