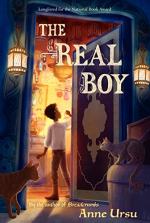 Anne Ursu
This Study Guide consists of approximately 80 pages of chapter summaries, quotes, character analysis, themes, and more - everything you need to sharpen your knowledge of The Real Boy.

This detailed literature summary also contains Quotes and a Free Quiz on The Real Boy by Anne Ursu.

The Real Boy by Anne Ursu is a fictional tale about a young orphan named Oscar and his transition from childhood to boy of wood and then on to young adulthood. He is hired by Master Caleb - the first magician in at least a generation, to be his hand and look after the chores considered too menial for either himself or his apprentice, Wolf, to deal with. Oscar is happy with the arrangement. He is 11 years old and socially awkward, preferring to be by himself, or in the company of the many cats who live in the cellar under Master Caleb's shop as well. Life however, has other plans.

Master Caleb is called away to the continent, leaving Wolf and Oscar to handle the shop and its contents on their own. Wolf, who enjoys anything that makes Oscar uncomfortable, takes that opportunity to force Oscar into the public. As soon as Caleb is gone, he announces that he and Master Robin's apprentice, Bonnie, are needed elsewhere and Oscar will have to run the shop in his stead. Unfortunately for Wolf, magic has begun to go awry, and both he and Bonnie are killed while in the woods. Oscar is saddled with the task of dealing with customers until Master Caleb returns, and while he manages to do so, Master Caleb's return is short-lived. He leaves again, almost immediately, and instructs Oscar to 'step up' and handle the extra responsibility for him. While attempting to act as shopkeeper, Madame Mariel, the healer, and her apprentice Callie come in for supplies. Callie is nice to him, and defends him when customers become agitated with his shortcomings. The second time Callie comes in, she does so alone. Oscar helps her, but she criticizes his manner with her, and corrects it. Then she offers him a deal. She will show him how to deal with customers if he will help her with the diagnosis of patients who have come to her since Madame Mariel left for the continent like Caleb had.

Oscar intends to do as Master Caleb instructs, but fate conspires against him. Callie comes as promised to help him cope with customers and show him how to talk to them, and she asks Oscar to come with her as she makes house calls in the City. This is another hurdle to overcome for Oscar as he's never been to the City. He takes Callie to the garden the following day as part of his deal to teach her which herbs are for what ailment, but when they arrive and enter Caleb's secret gardens, they are stunned to find something has rampaged throughout the garden, even destroying the glass house Caleb created for the more sensitive plants that wouldn't normally grow in this are. Oscar is shocked, but this is only the beginning. When Oscar opens the store again, he learns that someone has been cutting down the wizard trees that surround the City, and infuse it with the magic of the collective 100 magicians who once rooted themselves there in an effort to stop the spread of the plague. Five trees are gone, and the illusion spells that hid the fact were failing.

Caleb returns and is furious when he sees how little money Oscar has collected in the shop since he's been gone. He slaps Oscar across the face and sends him to the cellar. Later that night, as Oscar is cleaning the shop, a magical monster bursts through the wall and rampages through the shop, consuming everything magical it can find. Made of forest detritus, the monster consumes vials of potions, sweeping them off the shelf and shoving them into its mouth. Caleb comes up when he hears the commotion, and while distracting the monster to allow Oscar to escape, he is killed. Again, Oscar's life unravels.

Callie's patient list increases daily as more and more City children are brought to her with a myriad of problems that at first seem unrelated, but she soon realizes that the problems are related to magic which like the illusion spells are failing. She and Oscar look for solutions. Oscar goes down to Caleb's workshop to see if he can find anything on the subject of failing magic, and instead comes across a hidden compartment in the floor containing a partially finished wooden boy. This discovery leads Oscar to believe that he also began life as a wooden child, which explains his social awkwardness.

When he shows Callie the wooden child, and explains his theory, she tells him she doesn't care how he started life. To her, he is just Oscar. It soon becomes apparent that the children of the City are all enchanted wooden children and the magic keeping them is unraveling. Together, she and Oscar must find a cure that works and put an end to the magical disruptions that are occurring. To do so, they must eliminate magic altogether, even though it means the end of the sacrifice made by the wizards of the past.

More summaries and resources for teaching or studying The Real Boy.