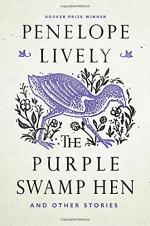 Plot Summary
+Chapters Summary and Analysis
“The Purple Swamp Hen”
“Abroad”
“The Row”
“Who Do You Think You Were?”
“Old as the Hills”
“A Biography”
“The Weekend”
“License to Kill”
“Mrs. Bennet”
“Lorna and Tom”
“Point of View”
“DIY”
“The Bridge”
“Theory of Mind”
“The Third Wife”
Free Quiz
Characters
Symbols and Symbolism
Settings
Themes and Motifs
Styles
Quotes
Order our The Purple Swamp Hen Study Guide

Penelope Lively
This Study Guide consists of approximately 85 pages of chapter summaries, quotes, character analysis, themes, and more - everything you need to sharpen your knowledge of The Purple Swamp Hen.

This detailed literature summary also contains Quotes and a Free Quiz on The Purple Swamp Hen by Penelope Lively.

NOTE: The following version of this book was used to create this study guide: Lively, Penelope. The Purple Swamp Hen. Viking, 2016.

This book is a collection of 15 carefully crafted short stories written by Penelope Lively. Each story is completely unique and no tale overlaps any other. These individualized and compartmentalized stories take on unique points of view, tone, and mood—specific to each story’s narrative and time period. Lively flexes her skills and establishes her breadth as a writer when she allows these stories to stand alone and leaves the reader to his own interpretation when making connections between the running themes throughout the collection. These themes touch upon the darker sides of human nature and on the painful aftermath that sometimes comes as a result of interpersonal connections. The collection takes on a rather cynical tone, with many of the stories taking sarcastic jabs at human beings and their somewhat misdirected efforts.

Lively places her stories in an order that has nothing to do with chronology. The collection contains tales from ancient Pompeii to post-WWI and into today. The different time periods emphasize the concept that human beings have not advanced much despite their lengthy time on the planet. This is summarized in the first story in the collection, “The Purple Swamp Hen,” when the narrator—the swamp hen himself–discusses human progress from his ancient time of existence into the present day. He is sarcastic in his reference to past human behaviors as being a “Benighted age” (9) and comments that human progress “Is not for me to proclaim” (9). As Lively presents in the different time periods to the reader, humans have made no improvements. The humans in “The Purple Swamp Hen” rank themselves into owners and slaves. This division continues in stories such as “Abroad,” “A Biography,” and “Lorna and Tom.” The Purple Swamp Hen’s home in a garden in Pompeii also shows him that humans hurt one another. They cheat on each other and they give in to carnal desires. This behavior continues in several short stories where infidelity ruins a relationship. In “Theory of Mind,” for example, the main character cheats on her boyfriend because she assumes he will not notice. This is no different from what the purple swamp hen observed in Pompeius’ garden when everyone cheated on everyone and fornicated among the leaves where they assumed no one would find them cheating. Regardless of the time period, Lively’s stories emphasize that, as technology has advanced, human behavior has not. It is ingrained in humans to hurt, cheat, lie, steal, and to allow greed to direct their decision-making.

The social and economic statuses of Lively’s characters also render them powerless to change the natural inclination of human beings to harm one another. These man-made divisions seem to be manifested as a means of comforting characters that need a sense of belonging through the methodical shunning of “outsiders.” There is a strong and obvious division of people in “Abroad,” where a young couple travels abroad because they patronizingly assume that peasants from other countries are charming objects for them to paint. They never consider these peasants as fellow humans, instead regarding them as lower class and available for their pleasure at any given time. The couple learns their preconceived notions are incorrect when a peasant family takes them in and teaches them what their lives consist of. The couple in “Abroad” has no desire to truly learn from others. They want others to be there for their entertainment. Lively does not stop at such obvious divisions. Rather, the characters in this collection choose to divide themselves into several different categories—seemingly in a conscious effort to seek comfort in separation. Mothers judge others for not having children in “Lorna and Tom,” while academicians look down upon people in the television industry in “A Biography.” Lively depicts human nature as actively dividing people into hierarchical placements either above or below themselves as a coping mechanism. The vast majority of the characters in this collection need these differences in order to define themselves.

Many of the characters in this collection struggle in their journey to define themselves based off of separating themselves from others who are not exactly like them. There is a sense of confusion when it comes to self-identity and self-acceptance, which leads readers to believe that the lost humans in Pompeii in “The Purple Swamp Hen” continue to procreate and make children who are equally lost. No one knows quite who they are and few know the process to solve this mystery. “A License to Kill” ends with young Cally asking herself, “I don’t know who I am yet, do I?” (97). She is neither aware of who she is nor does she know how to find out the answer. Cally assumes that her identity will sprout from her job and her income and her coworkers. The character of Alison in “The Bridge” takes the time to reflect on her own identity when she turns 60. She waits until her birthday to run down a list of her traits and finally determine that she has been useful (151). She has aged and no longer recognizes herself because, much like young Cally, Alison does not know who she is apart from her job and her home and her regret for her failed marriage.

Marriage is not impervious to Lively’s critical commentary regarding human nature. The marriages in this collection are filled with disdain, distrust, and miscommunication. The relationships are riddled with resentment over money or lack of passion. In this collection, marriage has no redeeming qualities, and it is as though it is always done out of convenience in reproduction. Frances in “Mrs. Bennet” admits to marring her husband “In a panic” (100) because she wanted to marry before she was too old to have children. There is more than one character that notes his or her marriage is based on the animalistic urge to procreate. “The Row” contains the strongest connection between marriage and the instinct to make offspring. The wife in the story even refers to marriage as pair bonding (26) and depicts the act of making love as something couples only do when thinking about having children. Marriage is not a respected institution in this collection. The relationships are fretted with a diverse grouping of troubles and no marriage maintains passion. There is a rather unexpected and ironic comment in the final story of this book. The character Stan in “The Third Wife” boldly declares that he supports marriage, claiming it is the decent thing to do (193). This becomes quite comical when the only character to support marriage so strongly is the also the only character who is a serial groom who marries women so he can steal their money.

This collection contains several comical moments along with light sarcasm that provide a short relief from the collection’s thematic disappointment in human beings. It seems as though little progress has been made and humans will continue, as they have always done, to harm one another. The collection contains a diverse grouping of stories—all lacking hope and progress.

More summaries and resources for teaching or studying The Purple Swamp Hen.