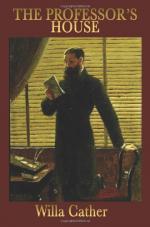 This detailed literature summary also contains Topics for Discussion and a Free Quiz on The Professor's House by Willa Cather.

The Professor's House by Willa Cather is a tale about dealing with loss and change. Godfrey St. Peter is a successful author and professor at a small Midwestern college, Hamilton, whose impending move to a new house sets off a series of personal and familial tensions. These tensions primarily revolve around Tom Outland, a remarkable friend and student of Godfrey's who died prematurely in World War I, and his legacy.

While finishing moving out of his house, Professor Godfrey St. Peter decides that he will continue to use his cramped, uncomfortable study on the third floor of his old house where for fifteen years he wrote his multi-volume Spanish Adventurers in North America. His attachment to the study reveals his sentimental temperament, which is not readily understood by his family. His connection to the study is due in part to his friendship with his former student, Tom Outland.

Tom Outland developed and patented ideas which were used to create the Outland Engine, a new type of plane engine. Tom left the patents to his fiancee, Rosamond, the daughter of Godfrey St. Peter. Louie Marsellus, who later married Rosamond, successfully developed and marketed Tom's ideas, which resulted in a large fortune for Rosamond. The money causes conflicts within the family and within the town community as well, especially in terms of who deserves money from Tom's invention. The family conflicts mostly deal with how money has changed Rosamond, and how Tom's memory is honored or dishonored.

The novel also tells Tom Outland's story in the second book. Tom had been a call boy in New Mexico when he befriended Rodney Blake. Tom and Rodney then get a job herding cattle. While they are working herding cattle, Tom discovers a number of abandoned cities on a cliff of a mesa. After Tom and Rodney explore the ruins for a few months, Tom goes to Washington to try to get experts to come and investigate. Tom is unable to get anyone to come. While he is gone, Rodney sells all of the artifacts to a German. Tom is mad at Rodney and they are no longer friends. Tom then goes to Hamilton to find St. Peter and start college. St. Peter is impressed with Tom's brilliance. Tom then goes off and dies in World War I.

The last book of the novel deals with a summer that St. Peter spends working on editing Tom's journal. St. Peter has a near death experience that allows him to let go of many things that he was unable to let go of otherwise.