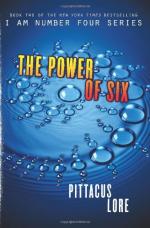 Pittacus Lore
This Study Guide consists of approximately 57 pages of chapter summaries, quotes, character analysis, themes, and more - everything you need to sharpen your knowledge of The Power of Six.

The Power of Six Summary & Study Guide includes comprehensive information and analysis to help you understand the book. This study guide contains the following sections:

This detailed literature summary also contains Topics for Discussion and a Free Quiz on The Power of Six by Pittacus Lore.

The Power of Six by Pittacus Lore is the second volume in a series that began with the book "I Am Number Four." It is a saga that pits good against evil on an interplanetary scale. Nine children and their guardians (Cepans) have been sent to Earth from the planet Lorien which is under siege. The Mogadorians have used up their own planetary resources and are now expanding outward, seeking greener pastures to sustain them. Lorien, the closest inhabitable planet to them is their first target. In an effort to save their race, nine children entrusted with the gifts of the elders are sent away in the hopes that when their Legacies develop, they will be strong enough to return to Lorien and reclaim their birthright. A tenth child, just a baby at the time, is sent to Earth on a second flight with a ship loaded with Chimaera.

Number Seven or Marina as she is known in her current Earth disguise, is living with her Cepan Adelina in the Santa Teresa convent/orphanage in Spain. Adelina has settled into convent life and has convinced herself that Lorien and Mogadorians are all part of an elaborate fairy tale. She has resigned herself to serving God. Marina is just beginning to understand the Legacies that are revealing themselves to her. So far, she's discovered that she has telekinesis, she can breathe under water, and she can heal with her touch. She spends all of her spare time in a cave she found nearby, storing food and honing her skills in preparation for the day that the Mogs will find her. The scars on her ankle reveal that Numbers One, Two, and Three are already dead. They are protected, but only as long as they stay apart. As long as that remains true, they can only be killed in order, and the others gain a scar for each loss as a warning.

John, who is Number Four is traveling in America with Number Six, his Chimaera named Bernie Kosar (Hadley originally) and his best friend Sam Goode. Though they defeated the group of Mogs who attacked them in Ohio, John lost his Cepan, Henri in the battle. Six lost her Cepan, Katarina years earlier, and now they are on the run, hiding from the police and from the Mogadorians. They head to West Virginia where the Mogs have hollowed out a large mountain. It is the site where Six was held captive for many months, and after her Legacy of invisibility developed, was finally able to escape from. Before leaving the region, she drew and hid a careful map. Now they are returning to retrieve the Loric chests taken that are their Inheritances and contain the tools necessary to beat the Mogs once and for all. Before this can occur, Six begins to 'hear' a call for help from Spain, and knows that one of them is in trouble. Compelled, she can do nothing but respond while John, Sam and BK attempt to retrieve the chests on their own. Each group will face life and death battles, gaining ground as they find each other and losing loved ones in the process. Six will help to beat back the Mogs in Spain with Marina (Seven), Ella (Ten), and friends of their cause while John (Four) and Nine manage to retrieve two chests and escape. However, they are forced to leave Sam behind in the Mogadorian stronghold. Battered and beaten back for now, they can only hope to regroup, find the others, and defeat the Mogadorians once and for all.

More summaries and resources for teaching or studying The Power of Six.

The Power of Six from BookRags. (c)2022 BookRags, Inc. All rights reserved.