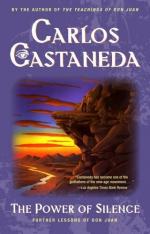 Carlos Castaneda
This Study Guide consists of approximately 30 pages of chapter summaries, quotes, character analysis, themes, and more - everything you need to sharpen your knowledge of The Power of Silence.

The Power of Silence: Further Lessons of Don Juan Summary & Study Guide includes comprehensive information and analysis to help you understand the book. This study guide contains the following sections:

This detailed literature summary also contains Topics for Discussion and a Free Quiz on The Power of Silence: Further Lessons of Don Juan by Carlos Castaneda.

THE POWER OF SILENCE is anthropologist Carlos Casteneda's account of the teachings and methods of a Mexican Indian sorcerer, don Juan Matus, taught him. This book is one of many that record the on-going process of becoming a sorcerer, including Carlos's path to sorcery. Carlos notes that to deal intelligently with everyday life we need to train for years. The knowledge we need is complicated. The same, he says, is true of the sorcerer's world - it requires great schooling through oral instruction, manipulation of awareness, and so on.

Don Juan describes himself as a nagual, his name for a sorcerer. The nagual worldview holds that the world is contained of great bans of energy that emanate from a kind of world spirit. It manifests itself in a force known as intent. The center of energy in the universe is a God-like power known as the Eagle. Humans are simply concentrations of energy and power, places where energy bands intersect. The center point of their energy bands is called "the assemblage point." The assemblage point dictates the state of awareness that each person is in. Most of the time their assemblage point remains unmoved and stuck in a state of awareness focused only on the concrete and practical, the mundane. The job of sorcery is to teach each person who wants to, to move their own assemblage points at will to achieve liberation from the ordinary ways of life in order to know the spirit and intent and the abstract. Humanity, from the sorcerers' view, has undergone a kind of corruption, which has moved each person's assemblage point to a place of self-focus, self-pity and self-reflection, and only the actions of the spirit through the practice of sorcery can reestablish one's connection with intent.

More summaries and resources for teaching or studying The Power of Silence: Further Lessons of Don Juan.