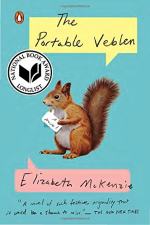 Elizabeth Mckenzie
This Study Guide consists of approximately 39 pages of chapter summaries, quotes, character analysis, themes, and more - everything you need to sharpen your knowledge of The Portable Veblen.

This detailed literature summary also contains Quotes and a Free Quiz on The Portable Veblen by Elizabeth Mckenzie.

The following version of this book was used to create this study guide: McKenzie, Elizabeth. The Portable Veblen. Penguin, 2016.

The Portable Veblen is a novel centering around the newly engaged couple of Veblen Amundesn-Hovda and Paul Vreeland. Veblen and Paul both live in modern-day Palo Alto, California. Veblen works as an office temp and works as a volunteer translator for the Norwegian Diaspora Project, which is based in Oslo, Norway. Veblen’s ancestors are from Norway, and she is named after Norwegian American economist Thorstein Veblen, whom both Veblen and her mother adore, and who was famous for criticizing consumerism and materialism. Paul Vreeland is a neurologist and medical research at Stanford Hospital. He is developing a new tool for performing emergency craniotomies, and the design has recently been licensed by a large pharmaceutical company called Hutmacher Pharmaceuticals.

The novel follows Veblen and Paul as they navigate the struggles of their engagement. Though in love with Paul and excited about the idea of marrying him, Veblen experiences an inexplicable sense of doom and trepidation. In addition, her neurotic and controlling mother, Melanie, appears to oppose the engagement because she does not want Veblen to be taken further out of her reach by the constraints of marriage. Veblen and Paul also experience friction in their relationship from the discovery of opposing values they hold. While Veblen admires strange and difficult lives and disdains materialism and consumerism, Paul is drawn to much more conventional methods of personality fulfillment, such as wealth and influence.

The actual plot of the novel is fairly simple and mostly revolves around two main plots: 1) Veblen and Paul’s relationship, and 2) Paul working with Hutmacher Pharmaceuticals on his new medical device. With regards to Paul and Veblen’s relationship, most of the development involves them meeting each other’s families. Veblen’s mother Melanie is married to Linus Duffy, a friendly and accommodating man who is not Veblen’s stepfather. Veblen’s mother and father divorced not long after marrying due to friction in their relationship. Veblen’s father, Rudgear, suffers from PTSD due to fighting in the Vietnam War, and he also suffers from dementia due to his genetics and advancing age. At the time of the novel, he resides at Sunny Hill Psychiatric facility. Paul’s parents are aging hippies whom Paul resents for their alternative lifestyle. He also resents that they always paid more attention to Justin, his mentally disabled older brother.

With regards to Paul’s work with Hutmacher Pharmaceuticals, Paul is put in charge of a clinical trial of the device necessary to test and refine the device, as well as to submit the device for FDA approval. The trial is run in partnership with the United States Department of Defense, because the device may be used by medics in the military. The clinical trial is set to be performed on medical cadavers as well as live volunteers. These volunteers are wounded veterans. Hutmacher Pharmaceuticals attracts these volunteers by manipulating their false hopes that the trial may actually improve their conditions. Paul is reluctant to go along with this but ultimately does. However, Hutmacher ends up using unethical means to get the device approved without the trial. They begin selling the device, which Paul knows to possess at least one major flaw. At the urging of Veblen, he reports Hutmacher Pharmaceuticals to the authorities.

The novel ends happily, with Paul having adopted Veblen’s values and worldview after his recent experiences. Veblen and Paul go through with their wedding, and the dysfunctions of their respective families appear to have been more or less resolved. Veblen and Paul end up moving to Norway, where Veblen works as a translator, and Paul works as a physician and medical researcher at the University of Tromso.

More summaries and resources for teaching or studying The Portable Veblen.