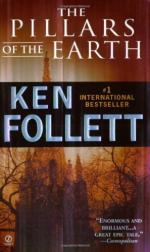 The Pillars of the Earth Summary & Study Guide

Ken Follett
This Study Guide consists of approximately 111 pages of chapter summaries, quotes, character analysis, themes, and more - everything you need to sharpen your knowledge of The Pillars of the Earth.

The Pillars of the Earth Summary & Study Guide Description

The Pillars of the Earth Summary & Study Guide includes comprehensive information and analysis to help you understand the book. This study guide contains the following sections:

This detailed literature summary also contains Topics for Discussion and a Free Quiz on The Pillars of the Earth by Ken Follett.

The Pillars of the Earth is a departure from author Ken Follett's typical suspense thriller. However, like his spy novels and fast-paced adventure tales, The Pillars of the Earth is meticulously researched and offers an insider's glimpse at the richly detailed world that his characters inhabit. The world he presents in this saga-length novel is England during the twelfth century. More specifically, the story takes place during the time now known to historians as The Anarchy. For much of the twelfth century, England's society, politics, and religion were in a continual state of upheaval resulting from King Stephen's tenuous grip on the throne. Prior to Stephen, King Henry I ruled England, but the sinking of the White Ship in the early 1120's left Henry without a rightful heir. Upon Henry's death in 1135, a battle for the crown ensues. The main contenders are King Stephen, who quickly grabs the throne and does his best to hold it for the next few decades, and Empress Maud, the late Henry's daughter. Not until Maud's son, Henry II, comes of age does England receive a ruler upon whom all the powerful nobles can agree.

Interwoven with the actual history of the times is Follett's epic tale of passion, deceit, hardship, and transcendence. The story begins with Tom Builder, a gifted, yet humble, mason whose dearest wish is to be granted the opportunity to build a cathedral. Cathedrals were the largest and most graceful buildings in existence in those days; building them required the efforts of hundreds of men, and thus a cathedral represented the ultimate challenge for an ambitious stonemason. In these early days, builders were only beginning to understand the mathematics of proportion. Most cathedrals were crudely built with exceedingly thick walls and tiny windows to avoid any threat to the stability of the building. Tom is one of the more enlightened breed who understands that straight, true walls will support larger windows and higher arches than previously thought possible. Tom is so set on pursuing his passion that he turns down secure, paying work to seek out any opportunity to work on a cathedral. As a result, his family's security is threatened, and when Tom's luck takes a bad turn, he, his wife, and their two children wind up starving in the forest.

Tom's third child is born on the frozen earth, and his starving wife, Agnes, dies in childbirth. With no milk to feed the baby, Tom must accept the harsh reality that baby Jonathon will die. He abandons the baby in the forest, but soon thereafter repents of his action and returns with his children to find the youngest member of the family. The baby is gone, but Tom meets his sudden love, Ellen, and from her and her son he learns that his baby has been rescued by a priest and taken to a nearby monastery. So begins the saga that ultimately intertwines the lives of Tom, Ellen, Ellen's son Jack, baby Jonathon, and the monk, Philip, who is prior of the monastery to which the baby is taken. Philip, unaware of Jonathon's heritage, decides to raise the baby at the monastery, and later, when he is promoted to prior of the larger monastery in Kingsbridge, he brings the baby along. When the old cathedral at Kingsbridge burns to the ground, Tom is given the opportunity he has so long desired. As master builder of the cathedral at Kingsbridge, Tom is able to achieve his dream, provide for his new family, and even develop a relationship with the baby he abandoned.

Yet darker forces are working in the land, personified by the evil Hamleigh family and the unscrupulous Bishop Waleran of Kingsbridge. Prior Philip holds his ground as a defender of truth and justice in Kingsbridge despite Waleran's many evil plots and schemes to steal the wealth and dignity of the people in Philip's charge. William Hamleigh provides a more physical threat. Rebuked by the beautiful Aliena, Hamleigh takes revenge on her father and succeeds in creating the downfall of Earl Bartholomew. Sworn to vengeance, Aliena raises herself from poverty and disgrace to a position of prominence unprecedented for a woman in this era. William makes her homeless, rapes her, destroys her wool business, and conspires with Bishop Waleran to prevent Aliena from marrying the love of her life, Jack Jackson. Yet despite all that William does, Aliena, like Philip, perseveres and somehow always manages to prosper. By the end of the novel she has restored her father's earldom to her ungrateful brother, Richard, and created a family with Jack. After William kills Tom Builder, the supremely talented Jack takes over as master builder and ultimately builds a cathedral that exceeds even the wildest imaginations of his late stepfather, Tom. The restoration of order to Kingsbridge Priory dovetails with the historical victory of the Church over King Henry II in the wake of the martyrdom of Thomas Beckett, the archbishop of Canterbury.

More summaries and resources for teaching or studying The Pillars of the Earth.

The Pillars of the Earth from BookRags. (c)2022 BookRags, Inc. All rights reserved.