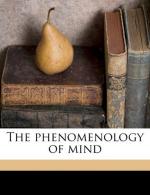 The Phenomenology of Mind Summary & Study Guide includes comprehensive information and analysis to help you understand the book. This study guide contains the following sections:

This detailed literature summary also contains Topics for Discussion and a Free Quiz on The Phenomenology of Mind by Georg Wilhelm Friedrich Hegel.

This is one of the greatest works of modern philosophy known in the Western or Occidental tradition of mankind. The author is a German. Gottfried Wilhelm Hegel is touted as one of the most brilliant minds of his time. His reputation was effectively established during his lifetime. The extent to which this has occurred during the history of philosophy is not entirely clear. Some became famous while living, others posthumously and in other cases, such as Nietzche, there is a myth that he only became famous after his death, but he was well known during his lifetime as a great thinker. Hegel lived his life in Germany. He did have one child out of wedlock, but was respectful and responsible towards both the mother and his son. He did also marry and have children with another woman.

The Philosophy of Mind came out when Hegel was in his late 30s. He put it together with a publishing deal rather than writing the whole thing while hoping for a publisher. There was great drama in how this came about. This was intended to be part of an embracing beginning rather than the completion of his philosophical treatises.

The greatest qualities of Hegel's philosophy is that it is all encompassing. It is also gloriously well organized. Of course, like everything, once a reader is really immersed in it, he or she will notice gaps in his theory. In the Phenomenology of Mind, Hegel begins by introducing a discussion of consciousness itself. Then he proceeds through subjective awareness and into objectivity. He then takes these individual ideas and puts them into a cultural and societal framework. He leads these into ethics and morality and then works with the more spiritual aspect of the mind. The books ends with the crescendo of philosophy, "Godmind" for short; the Absolute and Absolute Knowledge in Hegelian terms. This is one of the classical contributions to humanity within the field of philosophy after 1500AD and from the European perspective.

There is gender related information within the book. In this treatise it reflects the German norm of Hegel's era and the historical tradition of women's domestic roles and how these relate with, set the stage for, are exempt from, and submit to the public laws that govern communities and societies as a whole.