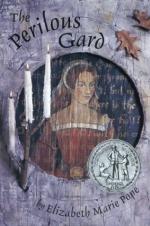 This detailed literature summary also contains Topics for Discussion and a Free Quiz on The Perilous Gard by Elizabeth Marie Pope.

Kate Sutton is living in the household of Princess Elizabeth with her sister, Alicia Sutton. The living conditions are near poverty levels, considering the opulence of life at court. Alicia writes to the Queen, complaining of the situation. Kate knows that the Queen will be furious, but when the reply comes, the Queen blames Kate for leading Alicia astray. Kate is sent to Perilous Gard, a castle fraught with myths and superstitions. She's under the care of Sir Geoffrey. Before she even arrives, Kate catches sight of the Lady in Green, who later turns out to be the leader of the Fairy Folk.

At the castle, Kate meets Sir Geoffrey's brother, Christopher, and is left in the charge of Master John when Sir Geoffrey leaves the castle. Kate quickly hears rumors of Sir Geoffrey's daughter, Cecily, who apparently drowned in a Holy Well located on the property. As she becomes better acquainted with Christopher, Kate learns that he was in charge of Cecily the day she went missing, and that he'd actually thrown a penny into the well and wished that Cecily was someone else's responsibility. Christopher is eaten with grief and returns to the castle only when Sir Geoffrey is around. When he's not there, Christopher lives in poverty in a leper's hut. Kate begins to hear rumors of the Fairy Folk taking children and adults to become slaves. There is also a requirement for the owners of the property to pay a "teind," which is a sacrifice required when the land or the people need healing. Christopher turns himself in to the Fairy Folk, willing to pay the teind in return for Cecily's release. Cecily is returned to the castle but Kate is taken hostage when it becomes evident that she knows about the Fairy Folk.

Sir Geoffrey receives a note sent by Kate outlining the story and the belief that Cecily is alive. He is on the way back while Kate and Christopher are being held hostage. Kate manages to help Christopher escape but when she recovers, she's in the house and Christopher is gone. Kate talks to Sir Geoffrey about the situation and he wants to find a way to eliminate all the Fairy Folk, fearing that they'll come after Cecily or Christopher. Kate assures Sir Geoffrey that the Fairy Folk will have scattered and won't be a problem in the future. Kate asks how Sir Geoffrey plans to counter the rumors that are certain to run rampant. Sir Geoffrey says that few people understand what really happened. He predicts that Randal will eventually sing a ballad about the Fairy Folk. Sir Geoffrey says people will believe that any stories told are just tall tales. When Christopher returns with Kate's father and sister, Kate believes that Alicia has won Christopher's heart. He soon corrects the misunderstanding, telling Kate that he loves her and plans to marry her. As the story comes to a close, Kate hears Randal singing a new song about the Fairy Folk, citing Kate's role in the situation.