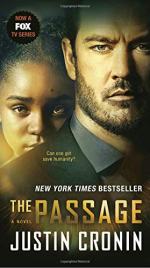 Justin Cronin
This Study Guide consists of approximately 138 pages of chapter summaries, quotes, character analysis, themes, and more - everything you need to sharpen your knowledge of The Passage.

The Passage (Book One of The Passage Trilogy) Summary & Study Guide includes comprehensive information and analysis to help you understand the book. This study guide contains the following sections:

This detailed literature summary also contains Quotes and a Free Quiz on The Passage (Book One of The Passage Trilogy) by Justin Cronin.

The following version of the novel was used to create this study guide: Cronin, Justin. The Passage. Ballantine Books, June 3, 2010. Kindle.

The Passage, a novel by Justin Cronin, is Book One of The Passage Trilogy. The story begins in the year 92 A.V. when the few people left alive in the United States after a disaster are forced to live in specially fortified cities to protect themselves against virals, the vampire-like creatures that resulted from a military experiment gone awry. In First Colony, Michael Fisher alone knew that the batteries powering the strong lights that kept the virals form attacking the city would last only a year or two. When a strange girl with ties to the military showed up unexpectedly at First Colony, Peter Jaxon, Michael, and a few others went on a mission of hope in an attempt to save their world.

When six-year-old Amy Bellafonte was abandoned by her mother at the Convent of the Sisters of Mercy, Sister Lacey Antoinette Kudoto felt a bond with the girl right away. She sensed God had a job for her in regard to Amy. It was not until Lacey took Amy to the zoo, what she believed would be a fun outing, that she realized Amy was very different from any child she had met before. Amy was taken from Lacey in the parking lot of the zoo by FBI Agents Brad Wolgast and Phil Doyle. Wolgast and Doyle had just returned from Texas where they had recruited Anthony Carter, the final test subject needed for the military’s Project NOAH. They had been ordered to get Amy for the experiment as well.

Project NOAH was the brainchild of Dr. Jonas Lear who had discovered a virus that showed evidence of being able to lengthen the human lifespan and make people more resistant to fatal diseases. When the military took over the project, they hoped to make a sort of weaponized human who would heal more quickly from injury. Instead, they got twelve former death row inmates who were not only super strong but also drank blood and could infect others with a bite. These twelve original virals infiltrated the minds of those monitoring them so they could break free from the compound in Telluride, Colorado in which they were being held.

On the night that the test subjects broke free, Wolgast had been called to Amy’s room in the infirmary of this Colorado compound. Amy had been infected with the virus. Because she was so young, it was believed the virus had worked on her as the researchers had hoped. With guidance from a supernatural force, Wolgast, Doyle, and Lacey worked together to get Amy safely out of the compound. Doyle and Lacey were both attacked by virals, leaving Wolgast to take Amy to the safety of an isolated mountain camp. They stayed there for nearly a year before the army detonated a bomb in an attempt to kill the virals. Wolgast died of radiation poisoning.

Nearly 100 years later, Michael built a radio to listen for anything that might show that he and the others at First Colony were not the only survivors of the epidemic. Michael knew that if they did not find replacement batteries for their lights or another place to live that they would die in a year or two. One night, a strange girl incapable of speech walked up to the compound. She was allowed inside. Her presence brought on a rash of strange behavior by various residents of the community. Michael’s radio picked up a transmission coming from the girl. He and his sister, Sara Fisher, a nurse, pulled a transmitter from the girl’s neck. Michael discovered that the transmitter was paired with a satellite owned by the U.S. Military located at Telluride. The message it transmitted ordered the person who found the girl, whom Michael learned was named Amy, to bring her back to the compound.

Believing that a visit to the military compound could mean a fresh hope for the people of First Colony, Peter Jaxon led a group including Michael, Sara, and Amy to Telluride. There, they discovered that Lacey was still alive. She had been given the same virus that Lear had given to Amy to save Lacey from the bite of a viral. Lacey had been waiting all those years for Amy to return. She gave Peter files about Project NOAH and explained to him exactly what had happened.

Knowing that Babcock, the strongest of the original twelve virals and those who had been created from him were on their way to try to interfere with the plans of Peter and the others to save the world, Lacey took Peter and Amy to Lear’s lab through a secret entrance. She gave Peter the vials of virus and then told them she planned to destroy the lab with a bomb. Lacey did not tell Peter and Amy that she planned to stay in the lab and draw Babcock to her so that he would be killed in the blast.

When Babcock was dead, the virals came to Amy, wanting to know who they were. Amy walked among them, telling them their names and giving them peace. When the sun rose, the descendants of Babcock died and turned into ash. Peter made a vow to find the other eleven original virals and kill them as well.

More summaries and resources for teaching or studying The Passage (Book One of The Passage Trilogy).

The Passage (Book One of The Passage Trilogy) from BookRags. (c)2022 BookRags, Inc. All rights reserved.