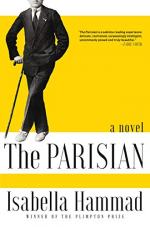 Isabella Hammad
This Study Guide consists of approximately 81 pages of chapter summaries, quotes, character analysis, themes, and more - everything you need to sharpen your knowledge of The Parisian.

The Parisian Summary & Study Guide includes comprehensive information and analysis to help you understand the book. This study guide contains the following sections:

This detailed literature summary also contains Quotes and a Free Quiz on The Parisian by Isabella Hammad.

The following version of the book was used to create this guide: Hammad, Isabella. The Parisian. Grove Atlantic, 2019.

Divided into three distinct parts, Hammad’s novel explores different periods of Midhat’s life: his time in Montpellier, his time in Paris and return to Nablus (his native town in Palestine), and his adult life in Nablus after marriage. Each change in section is punctuated by a major event.

The first part of the novel sees Midhat, a Nabulsi young man who spent his school years in Constantinople at a French high school, travel from the Middle East to southern France, embarking on the journey in pursuit of a medical degree in Montpellier. He met many new people and worked hard in his studies at the university, but he struggled in adapting to French culture and language. Many of his new acquaintances harped on his exoticism and the allure of his culture. As World War I raged, Midhat fell in love with Jeannette, the daughter of his host. The two bonded over the loss of their mothers when they were both children, and Midhat helped Jeannette to work through the emotional baggage of her mother’s suicide. Through the deaths of friends and family members, the two young lovers lived out the war on the home front, until Midhat discovered that he was being researched and reported on by his host, Doctor Molineu, for an anthropological study of the Islamic mind that Midhat views as invasive and offensive. Breaking with Jeannette, he left Montpellier for Paris.

Thus begins the second part of the novel, in which Midhat moved into the Paris apartment of a friend he had made on the ship to Montpellier the year before. He abandoned his medical studies in favor of reading history at the Sorbonne, and he became quite active in political debate within Arab exile circles in Paris. With his new friends, he discussed the future of the Levant (the region encompassing modern-day Palestine-Israel, Syria, Jordan, and Lebanon) in the wake of the end of the war and the fall of the Ottoman Empire, as Britain and France vied to take control of the region while Arabs debated questions of Levantine unity. He adopted a much more cosmopolitan lifestyle while there, complete with women and alcohol, but one day he decided he must return home to Palestine. He wrote Jeannette a letter, then sailed across the Mediterranean. Once home, his father was strict with him, disapproving of his new way of life. He received a response letter addressed to Midhat from Jeannette, but never allowed his son to see it. Midhat entered the family business and was forced to find a wife in Nablus. His grandmother set him up with a young woman of high social standing named Fatima, and after two failed proposals, they finally marry. However, Midhat’s father died before the wedding and did not leave the family textile business to his son. Throughout this section, the seeds of social unrest were sprouting among Arabs in the face of European colonial regimes and a rapidly increasing Zionist presence in Palestine.

The third section begins with an account of Hani Murad, a friend of Midhat’s from his Arab political circles in Paris, and Sahar Murad, his cousin, telling the dynamic story of how the two came to be married. As Sahar grew older, she became a political activist and protester like Hani. By this time, Midhat and Fatima had four children and Midhat owned a successful tailoring business. As Jewish immigration to Palestine increased, so too did the tensions and nationalist sentiments between the Arabs and their Zionist counterparts. One day, Midhat found the letter from Jeannette, and it drove him to insanity. He was checked into the local hospital then soon after moved to a psychiatric ward in Bethlehem. After many months in which the Arab uprising against the British reached its peak, Midhat’s cousin began fighting actively, and Hani was arrested, Midhat’s family came to remove him from the hospital and take him home. Once back in Nablus, however, his cousin Jamil was killed by the British. In the closing pages of the book, Midhat forgave an old French priest, Père Antoine, as a proxy for forgiving Doctor Molineu, his host in Montpellier who had so gravely offended him and drove him away from his love, Jeannette.

More summaries and resources for teaching or studying The Parisian.

The Parisian from BookRags. (c)2022 BookRags, Inc. All rights reserved.