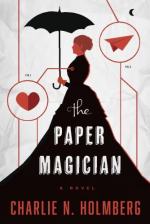 Charlie N. Holmberg
This Study Guide consists of approximately 37 pages of chapter summaries, quotes, character analysis, themes, and more - everything you need to sharpen your knowledge of The Paper Magician.

This detailed literature summary also contains Quotes and a Free Quiz on The Paper Magician by Charlie N. Holmberg.

“The Paper Magician” is a new adult historical fantasy novel by Charlie N. Holmberg which recounts the efforts of nineteen year-old paper magician Ceony Twill to save the life of her teacher and love interest, Emery Thane. When the novel begins, Ceony has just graduated from the Tagis Praff School for the Magically Inclined in London. Magicians primarily work with whatever material they are assigned and bonded to, such as metal or paper. Ceony, hoping to be bonded to metals, is instead bonded to paper because there so few paper magicians, or Folders. She is then assigned to apprentice to thirty year-old Emery Thane.

Within a day, Ceony realizes that Thane has impressive powers and much to teach, but she still considers Folding to be a form of magic intended for mere entertainment. As she comes to learn over the next few weeks, that is not the case. Thane teaches her to breathe paper animals into life, and cast spells using paper chains and other assemblages. He also teaches her to generate imagery based on the things she reads from paper. Thane even goes so far as to create a dog companion for Ceony, since her own real dog is at home. Ceony is delighted, and names the dog Fennel. Thane also has Ceony read books on subjects as diverse as anatomy and astrology but for what purposes, Ceony does not know.

Ceony warms up to Thane, cooking for him and tending to household chores. When Thane suddenly leaves for a six-day period, Ceony feels empty and alone without him. When Thane returns with a bandaged arm, he avoids questions about where he has been. Later that day, a mysterious woman named Lira appears in the house, throwing Ceony to the side and using blood to cast a magic spell on Thane. Ceony realizes Lira is an Excisioner, a magician of the flesh, a dark and evil form of magic. Lira uses a spell to extract Thane’s heart before disappearing.

In tears, Ceony rushes about, crafting a paper heart which she puts into Thane’s chest. Miraculously, he manages to survive. He instructs her to bind him with a magical vitality chain, which will give him one or two days at most to live. Thane is consigned to his fate, but Ceony is not. She begs him to hold on. She alerts the magical authorities, then crafts a number of paper birds whom she instructs to track down Lira. One bird is successful.

Using an enchanted paper glider, Ceony and Fennel follow the bird to Foulness Island in the English Channel. There, Ceony and Fennel discover Thane’s heart in a cave, and are confronted by Lira. Lira reveals the heart to be a trap, for the cave in which they now stand is actually Thane’s heart. Ceony and Fennel narrowly manage to avoid being killed by Lira by stepping back, and the world around them transitioning into a series of memories from Thane’s past.

Traveling through his heart, Ceony learns that Thane was orphaned at the age of three, that he was once married to Lira, and that he divorced her when he learned that she was practicing the dark magic of Excision. She also learns that he sheltered Lira one night when Lira was on the run –something for which Thane blames himself as dozens of other innocent people end up dying at her hand. Ceony also sees that Thane has hopes for a future, a wife and children. This makes Ceony happy, and helps her to realize that she is falling in love with Thane.

She urges Thane to fight the spell on his heart, and prepares for a final confrontation with Lira. Thane successfully frees Ceony, who battles Lira for Thane’s heart. Using spells Thane taught her, Ceony successfully throws Lira off. Using Lira’s own knife against her, Ceony slashes Lira’s face and uses her blood to write down a spell into existence, in which Lira is turned to stone. With Thane’s real heart in hand, Ceony and Fennel race back to Thane’s house, and restore him to life. The authorities are dispatched to the scene of Lira’s last location, but do not find her.

Thane takes several days to recover. Ceony watches over him all the time, aware that she is indeed in love with him. When Thane awakens, he tells Ceony she saved his life, and speaks of the guilt he feels for having once sheltered Lira. Ceony explains that the past makes people who they are. As the novel ends, Thane tells Ceony that he never wanted to be a Folder, either, so he and Ceony have more in common than she may think. This causes Ceony great happiness.

More summaries and resources for teaching or studying The Paper Magician.