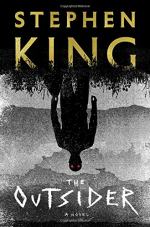 The Outsider: A Novel Summary & Study Guide includes comprehensive information and analysis to help you understand the book. This study guide contains the following sections:

This detailed literature summary also contains Quotes and a Free Quiz on The Outsider: A Novel by Stephen King.

The following version of the novel was used to create this study guide: King, Stephen. The Outsider. Scribner, May 22, 2018. Kindle.

In The Outsider by Stephen King, Detective Ralph Anderson was stumped when physical evidence placed a suspect for the brutal murder of a child in two different places at one time. Taught to follow the physical evidence, Ralph encountered amateur detective Holly Gibney who showed him that sometimes the supernatural does impact the natural world. The unlikely pair use the fable of El Cuco, a Mexican ghost or monster, to keep the creature from killing again.

Little League coach Terry Maitland did not have a criminal history. However, the district attorney and lead investigator had such a tight case against him in the murder and mutilation of Fred Peterson that Maitland was arrested in the middle of the semifinal game. Ralph began to feel uneasy about what he had once thought was a slam-dunk arrest when Terry presented the cops with an alibi as well as witnesses who were with him in another town at the time of the murder. The damage was done by the public arrest. Terry was shot by a bystander, the brother of Fred, when Terry was taken from the jail to the courthouse for arraignment. In his dying breaths, Terry told Ralph he was innocent and asked Ralph how he was going to clear his conscience after playing a role in Terry’s death.

Even though Ralph still believed Terry was guilty, he continued to investigate the murder not only to solve the mystery of Terry’s apparent ability to be in two places at once but also to make sure there was not a child killer still on the loose. After Ralph’s wife, Jeannie, was visited by a strange man who warned her that he would kill Ralph if Ralph did not stop meddling in the case, Jeannie tried to convince her husband that he was dealing with some sort of supernatural creature. Ralph refused to believe her and continued the investigation.

Meanwhile, Holly Gibney, an amateur detective, was hired by the lawyer representing Terry’s family to follow up a lead in Ohio. Holly discovered that a similar pair of murders had taken place in Ohio about the same time Terry and his family had been there. Like Terry, the man accused of the murder also claimed to be innocent and had an alibi for his whereabouts the day of the murders.

Comparing what she had learned about the murder in Ohio with the one in Flint City, Holly decided they were dealing with a form of a monster known in Spanish legend as El Cuco. This monster had the ability to transform himself so that his appearance and DNA matched that of a normal person. Holly met with Ralph and others working on the case, but Ralph made it clear he thought her explanation was crazy. Ralph began to change his mind about Holly when she used a black light to find traces of liquid that sloughed off the creature when it visited Ralph’s house. Presented with evidence, Ralph found it difficult to continue to deny that something had been in their house.

Ralph and Holly tracked the creature to the Marysville Hole. The day before they went to find and kill it, Holly told Ralph that she needed him to believe that the creature really existed. Ralph promised to set aside his disbelief. They found the creature hiding in a cave. Holly killed it.