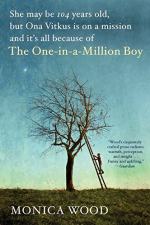 Monica Wood
This Study Guide consists of approximately 36 pages of chapter summaries, quotes, character analysis, themes, and more - everything you need to sharpen your knowledge of The One-in-a-Million Boy.

This detailed literature summary also contains Quotes and a Free Quiz on The One-in-a-Million Boy by Monica Wood.

The following version of this book was used to create this study guide: Wood, Monica. The One-in-a-Million Boy. Houghton Mifflin Harcourt, 2016.

The novel opens in Portland, Maine, where most of the book’s action takes place. Quinn Porter, father of a central character referred to only as “the boy,” arrives at the house of Ona Vitkus, a 104-year-old woman for whom the boy had done chores as part of his Boy Scouts community service. Quinn has agreed to take over the boy’s responsibilities at Ona’ house in the wake of the boy’s sudden and unexpected death due to a heart condition. After performing his chores at Ona’s house, Quinn goes to the house of his ex-wife and the boy’s mother, Belle Cosgrove. Quinn has decided to continue paying child support even though the boy is deceased. Quinn views this as a type of self-imposed penance for being a largely absent father. Quinn is a musician and valued his career more highly than his relationships with Belle and the boy, although Quinn’s career had never gained substantial traction.

The narrative then transitions to focus on the relationship between Ona and the boy. Despite being a rather self-isolated woman, Ona found that she genuinely enjoyed the boy’s company. The boy is portrayed as eccentric but sincere, polite, hard working, and enthusiastic. The boy was obsessed with world records, and he convinced Ona that she should attempt to break an age-related record, such as oldest person or oldest licensed driver. The only problem was that Ona does not have documents, such as a birth certificate, that prove her age, but Ona said that they would figure that out.

The narrative then shifts back to the present and focuses on Quinn. Quinn has been working as a substitute for a Christian rock band called Walk the Lane. Walk the Lane has been gaining significant traction, and it appears that they may soon be offered a record deal. Quinn hopes that they ask him to stay on as a permanent guitar player so that he can experience the success that he never experienced on his own.

When he was alive, the boy had helped Ona train for the driving test so that she could be eligible for the record of oldest licensed driver. After the boy’s death, Quinn decides to take up the task of helping Ona practice for the driving test. Eventually, Ona and Quinn decide to visit Ona’s son in a nearby town to ask if he knows where Ona’s birth certificate is. Quinn decides to bring Belle along so that Belle can get out of the house and maybe briefly take her mind off of her grief for her son. Unfortunately, when they speak with Ona’s son, Laurentas, he informs them that Ona’s birth certificate was lost in a fire many years ago. Belle, who works in the state records office, says that she will look to see if there are any records in the archives that can prove Ona’s age. Shortly after their visit to Laurentas, Belle marries her boyfriend, Ted Ledbetter, who is a single father and the scoutmaster of the Boy Scout troop of which the boy had been a member.

Not long after Quinn and Ona return from their visit to Laurentas, burglars break in to Ona’s house and frighten her. Ona activates a security alarm, which scares away the burglars, and she calls Quinn, who arrives to comfort and console her. Later, Quinn drives to and from a gig using Ona’s car, as she has let him borrow it, and he is pulled over by a police officer. The officer impounds the vehicle because the registration is expired, and Quinn calls Belle and Ted, who give him a ride. Belle and Ted tell Quinn that Belle has been giving the money given to her by Quinn to the Boy Scout troop of which Ted is the scoutmaster. A few days later, Belle visits Ona and brings several records that she has found—such as old census records—that prove Ona’s age. Meanwhile, Quinn is offered a position as musical producer for Walk the Lane, as the band has recently signed a record deal, and Quinn accepts the job, although he is a little disappointed that he will not actually be in the band. During his next visit to Ona’s house, Quinn realizes that he has developed a deep sense of familial, platonic love for Ona. The novel ends with a list of four age-related world records that Ona eventually sets.

More summaries and resources for teaching or studying The One-in-a-Million Boy.