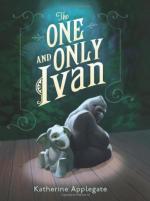 The One and Only Ivan Summary & Study Guide

K. A. Applegate
This Study Guide consists of approximately 17 pages of chapter summaries, quotes, character analysis, themes, and more - everything you need to sharpen your knowledge of The One and Only Ivan.

The One and Only Ivan Summary & Study Guide Description

The One and Only Ivan Summary & Study Guide includes comprehensive information and analysis to help you understand the book. This study guide contains the following sections:

This detailed literature summary also contains Topics for Discussion on The One and Only Ivan by K. A. Applegate.

"The One and Only Ivan" is a novel by Katherine Applegate. In this novel, Ivan is a silverback gorilla who lives in a stationary circus. Ivan is good friends with the other animals in the circus, especially Stella the elephant and Bob, a stray dog. When Stella dies, Ivan makes a promise to save her young friend, Ruby, from a life of captivity. It takes some time, but Ivan and Ruby are eventually moved to a zoo. "The One and Only Ivan" is a book of great courage and hope.

Ivan lives in a stationary circus with Stella the elephant and Bob, the stray dog. One day the owner of the circus buys a new elephant, a baby named Ruby. Stella takes charge of Ruby, mothering her in absence of Ruby's own mother. Only Stella has a foot that is often infected and the owner of the circus, Mack, does not like to call the vet because of the expense. Stella gets another infection in her foot and she dies because Mack never calls the vet.

Before Stella died, she made Ivan promise to take care of Ruby. Ivan is not sure how to do this, but he knows he must when Mack begins hitting Ruby with a claw-stick in order to train her to do Stella's tricks. One night, the janitor's daughter, Julia, gives Ivan some finger paints and it gives him an idea. Ivan makes a huge picture of Ruby in the zoo and writes the word home at the bottom. Ivan gives this picture to Julia. Ivan hopes Julia can help him get Ruby to the zoo, but instead Julia talks her dad into placing the pictures on a billboard used to advertise the circus.

Reporters come in response to the billboard. They take pictures of both Ivan and Ruby, as well as the circus and mall. Then a cameraman sees the claw-stick and shows that on television as well. Protestors come and then an inspector. Soon a woman from the zoo begins visiting. In time, Ivan comes to realize the zoo woman wants to take him and Ruby to the zoo. Ivan convinces Ruby it is safe and she should do what the woman wants.

Ivan and Ruby are taken away. Ivan is placed in a strange cage that he finds to be cleaner, but smaller than his last one. Then they begin showing him a television show of other silverback gorillas. One day, the zoo lady opens a door and Ivan can see the gorillas on the other side of a large glass door. In time, Ivan is allowed to go out with the gorillas. It takes some time, but he finally remembers how to act like a silverback.

The zoo lady shows Ivan Ruby on the television. She is with a new elephant family somewhere in the zoo and she looks happy. A short time later, Julia comes to visit. Ivan learns she has taken in Ivan's dog friend, Bob.

More summaries and resources for teaching or studying The One and Only Ivan.

The One and Only Ivan from BookRags. (c)2022 BookRags, Inc. All rights reserved.