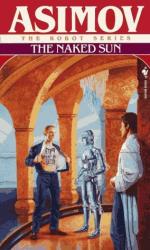 This detailed literature summary also contains Topics for Discussion and a Free Quiz on The Naked Sun by Isaac Asimov.

The Naked Sun by Isaac Asimov is the story of an Earthman, Elijah Baley, who is called to a distant planet of Solaria. In Solaria, robots vastly outnumber humans and people go their whole lives without seeing another person, yet on this planet, a murder has been committed. Elijah soon finds that he is in the middle of a conspiracy that goes beyond one murder and will affect more than just one planet.

Elijah Baley, and Earthman detective, is asked for by name to investigate the death of Rikaine Delmarre on a distant planet. The planet, Solaria, contains only a few thousand people and has no crime and so no police. Some of those on Earth feel that the outer planets, such as Solaria, pose a threat to them. Elijah is also told it is important that he find out as much about Solaria while he is there. Elijah reluctantly takes the assignment and meets up with a partner that he had worked with once before, Daneel Olivaw. Daneel is a robot that convincingly passes for human.

Elijah and Daneel begin their investigation but have trouble getting straight answers from those who knew Rikaine Delmarre. On the planet of Solaria, it is considered foul to be within seeing distance of anyone else and the whole planet is fully dependent upon their robots. Before long, Elijah discovers that Rikaine Delmarre knew something was happening that would threaten human life, but Rikaine Delmarre didn't explain what that was. The robotics first law states that a robot can't knowingly hurt a human. Before long there is another attempted murder and then an attempt on Elijah's life.

Elijah begins to realize that the robots are somehow involved. Elijah is interviewing the wife of Rikaine Delmarre when suddenly Elijah has an attack and faints. Elijah would have fallen into a pond and drowned had Daneel not shown up. When Elijah awakens, he suddenly has a realization of who is involved and what is going on. Elijah calls a meeting with the people that knew Rikaine Delmarre. Over an elaborate set up, Elijah explains who orchestrated the murder of Rikaine Delmarre as well as an attempt on Elijah's life. The person is the head of robotics, Jothan Leebig. He admits to all the crimes before he takes poison, killing himself. Jothan Leebig had spent his time trying to get past the robots first law so that he could use them in war. Rikaine Delmarre found this out and Leebig had him killed.

Elijah finds that Earth's weakness is more of their own fear and suggests a way to begin fixing Earth's problems. The answer to this problem will take more than one day to fix.