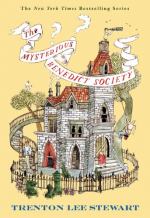 This detailed literature summary also contains Quotes and a Free Quiz on The Mysterious Benedict Society by Trenton Lee Stewart.

Reclusive genius Mr. Benedict chose four children who were gifted, but without parents, to undertake a mission to save the world in the novel “The Mysterious Benedict Society” by Trenton Lee Stewart. The people of the world were being frustrated and mentally drained by subliminal messages being sent to them through television and radio broadcasts by Mr. Benedict’s lost twin brother Ledroptha Curtain. Mr. Curtain had hoped to make himself the hero when he saved the world from a public panic that he created. Themes addressed in the novel include the desire to belong, confronting one’s fear and the importance of teamwork.

When his tutor, Miss Perumal, pointed out a newspaper article asking for gifted children who wanted special opportunities, Reynie Muldoon hoped he’d be able to pass the tests and earn those opportunities. He was surprised when he passed the tests and was one of four children chosen to act as special agents for Mr. Benedict. Mr. Benedict was a genius who believed subliminal messages were being sent through the television and radio from the Learning Institute for the Very Enlightened. He planned for Reynie and the other children to help him find out why the messages were being sent and what the Sender hoped to accomplish with the Messages.

At the Institute, Reynie and his friends (Constance, Kate, and Sticky) quickly put together what Mr. Curtain was doing. When they passed along the information to Mr. Benedict that Mr. Curtain was in the final stages of modifying his Whisperer and was preparing to begin the Improvement stage, Mr. Benedict tried to get the children away from the Institute. He felt the children were in too much danger; but, they refused to leave until their mission was complete. The children outsmarted Mr. Curtain by getting Constance into the Whispering Gallery. Although her childishness had held up the group at some times, it was Constance’s stubborn defiance that ultimately allowed the group to overwhelm Mr. Curtain’s machine.

Once their project was finished and the children were back at Mr. Benedict’s house, the story ended happily with all of the children getting families. Reynie was adopted by his tutor; Sticky’s family came looking for him; and, Constance was kept by Mr. Benedict. When Milligan began to recover his memories, he realized Kate was his daughter.