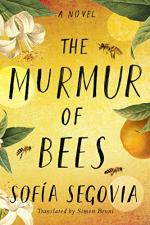 Plot Summary
+Chapters Summary and Analysis
“Blue Boy, White Boy” – “Broken Promises”
“The Spaniard Arrives in October” – “The Story That Was Told, Is Told, and Will Be Told, Perhaps”
“Gaps That Were Left” – “Where Does the Devil Go When He’s Lost?”
“Only the Living Understand” – “The Day the Mule Takes the Reins”
“New Stories to Tell” – “Nothing. Just Crickets”
“There Are Monsters” – “It Will Hurt”
“Yes. Why Would You Want to Remember, Francisco Junior?” – “...Lives by the Sword—or the Bullet”
“So Close and Yet So Far” – “An Empty Roof”
“Your Mama Never Forgave Herself That Slap” – “Sweet Ignorance”
“Song From the Past” – “But Now These Bees Are Flying around Us,”
Free Quiz
Characters
Symbols and Symbolism
Settings
Themes and Motifs
Styles
Quotes
Order our The Murmur of Bees Study Guide

Sofía Segovia
This Study Guide consists of approximately 65 pages of chapter summaries, quotes, character analysis, themes, and more - everything you need to sharpen your knowledge of The Murmur of Bees.

The Murmur of Bees Summary & Study Guide includes comprehensive information and analysis to help you understand the book. This study guide contains the following sections:

This detailed literature summary also contains Quotes and a Free Quiz on The Murmur of Bees by Sofía Segovia.

The following version of this book was used to create the guide: Segovia, Sofía. The Murmur of Bees. Translated by Simon Bruni, AmazonCrossing, 2019.

The Murmur of Bees began on an October morning in 1910. Nana Reja, the wet-nurse for two generations of the Morales family, lived on Hacienda La Amistad, now owned by Francisco Morales. The elderly woman found an infant with a cleft lip, covered in bees, far from the plantation. Francisco Morales Junior recounts his childhood on La Amistad in tandem with the events of that morning. Simonopio generated fear because of his birth defect, especially in Francisco’s most recent hire, Anselmo Espiricueta. Despite this, Simonopio grew into a caring, intelligent, and observant child, cared for by Nana Reja and his godparents, Francisco and Beatriz. He had the ability to understand his bees who rarely left his side, and could sense past, present, and future events. With the knowledge that something deadly would strike Linares, Simonopio fell sick to keep the Morales family away from Linares.

Mercedes Garza was the first in Linares to die of Spanish flu, but her funeral spread the infection. Soon, many people died of the infection each day. One boy survived the illness, and while the townspeople wished to believe in his miraculous resurrection, his recovery at least brought hope of a future after the pandemic. Simonopio’s unrelated illness kept the Morales family away from Mercedes’s funeral. Once the outbreak began, Francisco quarantined his family and workers on La Amistad and later La Florida. Only Espiriceta’s family was left behind; he sent his wife to Linares and put them at risk. Soon, Espiricueta lost his pregnant wife and four of six children to the infection. Espiricueta, a transplant from the South in search of land for the taking, resented Francisco. He believed that Francisco would give him land, not make him an employee. Over the years, that resentment grew and expanded to include Simonopio.

Beatriz struggled in quarantine on La Florida, but Simonopio brought her comfort. Once back on La Amistad, Beatriz brought Espiricueta’s daughter a gift. Simonopio accompanied her, venturing there for the first time. He sensed then that Espiricueta was the coyote that threatened the lion in Francisco’s story—that Espiricueta was the villain in Simonopio’s life story. After the Morales family and their workers returned to La Amistad, hope was renewed, especially with the blossoming love between Carmen and Antonio. Francisco and Beatriz purchased a home in Monterrey to allow them to court. Meanwhile, the animosity between Espircueta and the Morales family grew more sinister. Espiricueta resolved to kill Simonopio. In response, eight-year-old Simonopio decided to grow emotionally and physically stronger. He knew it was important to follow his bees to their destination, even if it took years of trying.

Francisco feared that his land and wealth were under siege in the wake of the Agrarian Reform. He decided to invest more in his land, which included purchasing a tractor. Simonopio finally reached the bees’ desired destination, returning with orange blossoms for Francisco. Francisco seized the moment, deciding to transform his lands into orange orchards. Eventually, the government would exclude orchards from being taken. Simonopio not only helped Francisco choose and transport his new orange trees, he also revealed to Beatriz that she was pregnant. Once Francisco Junior was born, Simonopio dedicated himself to the baby. In the meantime, Espiricueta grew even more resentful, making friends with nomadic agrarians camping in the area.

Simonopio felt responsible for Francisco Junior’s well-being after his birth. Francisco Junior spent most of his early childhood with Simonopio, learning how to speak like him and translate his speech for others. Meanwhile, Espiricueta had been stalking Lupita, the washerwoman, for four years. He approached her one night, and the next morning, Simonopio found her murdered. Beatriz and Francisco wanted revenge, but Simonopio did not know who the murderer was, either. Francisco armed his men with the intention of fighting off the agrarians, whom he believed were responsible. After Simonopio wandered the orchards, he promised Francisco Junior never to leave him again.

Simonopio brought six-year-old Francisco Junior to school every morning, and one day, they heard an announcement for a show. A man would sing underwater on the upcoming Saturday, and Simonopio agreed to bring Francisco Junior. That Saturday was also Francisco Junior’s seventh birthday. Instead of watching the show, Beatriz and Francisco insisted that he join his father to plant orange trees on Espiricueta’s plot. Simonopio, respecting their time together, resolved to watch the show as planned. Francisco Junior, in the present, allowed himself to remember the rest of this story as the taxi driver drove him through Linares.

Beatriz sent search parties out For Francisco and Francisco Junior, learning the next morning that Francisco had been murdered. Simonopio returned with Francisco Junior and a search party two days later. Although Simonopio would not relay what he witnessed, the family understood that Espiricueta was to blame. Beatriz struggled to regain her confidence but ultimately decided to take on her late husband’s responsibilities. She sold most of her land with the intention of moving to Monterrey indefinitely. Although Simonopio was included in these plans, he knew his future was not in Monterrey. Rather than heed Beatriz’s wishes, Simonopio resolved to stay behind with Nana Reja, his bees, and the land. Francisco Junior struggled to accept this throughout his life, but with the knowledge of his new senses, he understood that Simonopio had only allowed them both to live the lives they were meant to.

At the site of his childhood home in ruins, Francisco knows that Simonopio awaits him in the afterlife, just as he waited for his return in life. Francisco tells his cab driver that he will not be returning, asking him to share his story, now told in full, to his posterity. Francisco, an elderly man, feels Francisco Junior growing stronger within him. He listens to the bees and his younger self, traveling to where he knows Simonopio will welcome him for the last time.

More summaries and resources for teaching or studying The Murmur of Bees.

The Murmur of Bees from BookRags. (c)2022 BookRags, Inc. All rights reserved.