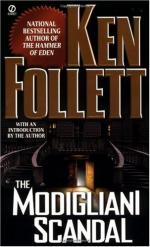 Ken Follett
This Study Guide consists of approximately 29 pages of chapter summaries, quotes, character analysis, themes, and more - everything you need to sharpen your knowledge of The Modigliani Scandal.

This detailed literature summary also contains Topics for Discussion and a Free Quiz on The Modigliani Scandal by Ken Follett.

The novel opens in a Paris bakery shop. The baker is making his second batch of bread that morning. Business is good. Outside, he sees an attractive girl and decides that it is safe for him to look since his wife is out back with the employees. He decides the girl is too skinny for his tastes but is very sexy. She entered his shop and purchased a loaf of bread. The baker detects an accent in her French, perhaps English. At the sound of the voice of his wife, Jeanne-Marie, the baker's fantasy ends.

The girl is Dee Sleign. She is talking about going to graduate school and writing her thesis on drugs and art when her boyfriend Mike suggests that she talk to an old man that he knows. He might be able to provide her with some information for her thesis. She does and comes up with information that there is a lost Modigliani in Italy. She decides to find the painting, and this begins the suspense of the novel.

Interwoven with all of this is Peter Usher. He is a young painter who is angry at the art establishment. He decides to get even by concocting an art forgery scheme to prove his point that the dealers have no real love of art are motivated by greed. They are receiving the money that should go to the artist. He doesn't make money off of the forgery swindle since the purpose was to make a point, not to get rich on the ransom.

The Modigliani Scandal is Ken Follett's first novel. He published it under a pseudonym before he became famous as an author. Even though the book received good reviews, Follett was not happy with it and regarded it as a failure at first because it came out differently from the book he intended to write. The novel is now published under his name and he no longer views it as a failure.

The novel is a thriller about crime in the art world. It contains all of the elements of suspense that Follett's other works contain and is difficult for the reader to put down, once they begin reading the book. The reader wants to know what happens next. The novel has a very surprise ending that is not anticipated by the reader.

More summaries and resources for teaching or studying The Modigliani Scandal.