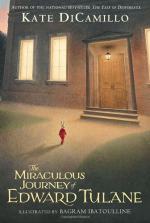 Kate DiCamillo
This Study Guide consists of approximately 63 pages of chapter summaries, quotes, character analysis, themes, and more - everything you need to sharpen your knowledge of The Miraculous Journey of Edward Tulane.

This detailed literature summary also contains Quotes and a Free Quiz on The Miraculous Journey of Edward Tulane by Kate DiCamillo.

The Miraculous Journey of Edward Tulane by Kate DiCamillo is the story of Edward Tulane, a china rabbit who becomes lost from the little girl who loves him. His travels span the course of more than 30 years as he tries to find love and happiness again, even if it means having a life without his former owner. As Edward goes from place to place he also changes emotionally. He meets new people that help him along his path and he not only finds the true meaning of love but he also finds his way home. This is a classic children's tale of hope, loss, change, but most importantly love.

Edward Tulane is a china rabbit who only loves himself. He lives with a little girl and her family, happily sitting in his chair in the dining room while the girl is in school and spending all of his time with her when she is at home. Until tragedy strikes when he is accidentally sent overboard on a cruise to London. Edward spends a good deal of time on the ocean floor before a fisherman comes along and catches him in his nets after a storm. At the home of the fisherman and his wife, Edward is dressed in dresses and his name is changed. In spite of that, he finds happiness with the couple until their daughter comes along to ruin everything by sending him to the town's garbage dump.

While in the dump, Edward becomes depressed as he is buried under piles of garbage. He is saved by a hobo and his dog who decide to keep Edward and travel with him. Edward again finds happiness in a simple life as he and his new companions travel and hide on train cars until they are caught and Edward is carelessly toss off of the train by a railroad conductor. He is eventually picked up by an old woman who uses him as a scarecrow before being stolen by a little boy who gives Edward to his dying sister. Edward finds that he deeply cares for this girl and she cares for him until she dies of an unknown illness. The brother takes Edward and escapes to Memphis, but tragedy ensues once again when Edward is broken by a mean cook in a cafe.

Edward and the boy are parted when the boy takes Edward to a doll mender. The doll mender will only fix Edward if the boy leaves Edward with him and the boy unfortunately agrees. Edward is completely fixed, but he is put on a shelf to await a new owner. Over the course of years, Edward waits and meets other dolls. One in particular helps Edward to regain his hope and faith that he will someday find a good home. His hope is rewarded when, after all this time, he sees the little girl who loved him so long ago. She is all grown up and now has a daughter of her own and they just happen to be shopping in the doll mender's shop. The little girl who loved him so long ago and Edward are finally reunited, with Edward finding that love is the most important thing he could ever have.

More summaries and resources for teaching or studying The Miraculous Journey of Edward Tulane.