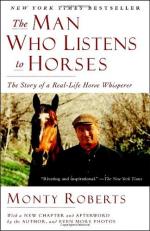 Plot Summary
+Chapters Summary and Analysis
Chapter 1, The Call of the Wild Horses
Chapter 2, Growing Up with Horses
Chapter 3, East of Eden
Chapter 4, The Sand-Castle Syndrome
Chapter 5 Flag is Up Farms Regained
Chapter 6 Deer Friends
Chapter 7 The Invitation That Changed My Life
When a Racehorse's Worst Memory is a Starting Gate
Chapter 9 Full Circle and Appendix
Free Quiz
Characters
Objects/Places
Themes
Style
Quotes
Topics for Discussion
Order our The Man Who Listens to Horses Study Guide

The Man Who Listens to Horses Summary & Study Guide

Monty Roberts
This Study Guide consists of approximately 29 pages of chapter summaries, quotes, character analysis, themes, and more - everything you need to sharpen your knowledge of The Man Who Listens to Horses.

The Man Who Listens to Horses Summary & Study Guide Description

The Man Who Listens to Horses Summary & Study Guide includes comprehensive information and analysis to help you understand the book. This study guide contains the following sections:

This detailed literature summary also contains Topics for Discussion and a Free Quiz on The Man Who Listens to Horses by Monty Roberts.

The Man Who Listens to Horses is the true story of Monty Roberts who bills himself as a "real-life horse whisperer." Monty details his life story, describing in detail how he cultivates his unique philosophy for working with horses. The book begins with Monty's childhood in Salinas, California and covers the most significant events in his life that shape his profound insights.

In the first part of the book, Monty's details the various highs and lows of his troubled childhood. Although he is lucky enough to be surrounded by horses from the time he is a small child, he also suffers a great deal at the hands of his abusive father. However, within Monty's childhood we see the seeds of the ideas that eventually form his world-renowned ideas about working with horses. For example, when Monty is a young teenager, he has the entrepreneurial vision to round up wild horses for the local rodeo. He is permitted to go to Nevada to locate Mustangs. Although he is accompanied by adult chaperones, Monty has the opportunity to observe wild horses in their natural habitat. He pays close attention to the interactions between the horses. In fact, Monty's groundbreaking methods for working with horses originate from the natural interactions between the wild mustangs he observes when he is just thirteen.

Monty describes fascinating experiences that take place throughout his youth and early teen years. Due to his expertise with horses, he is chosen to be a stunt double in the movies for various stars. He also meets Brownie, his favorite horse, who accompanies him throughout his childhood. He also wins various horse competitions over the years riding Brownie and other horses as well. As a boy, Monty gains the reputation of being an expert when it comes to horses. Additionally, when Monty is about 20 years old, he has the opportunity to become friends with James Dean, who is in Salinas filming East of Eden. Monty describes the exciting days befriending James Dean and acquainting him with various ranch activities including how to spin a rope.

Throughout Monty's life, he continues to learn about horses and becomes more and more of an expert. When he is 31 years old, an eccentric millionaire hires him to create and manage a full-scale thoroughbred facility named Flag is Up Farms. This particular experience takes Monty to exciting heights, but also brings him to a major low-point in his life as well. As it turns out, this millionaire has a severe mental illness that provokes him to try to destroy the facility once it has been created. However, the end result is that through a series of strange and traumatic events, Monty ends up owning the facility.

Throughout the book, Monty educates the reader about his techniques as well as his philosophies on the importance of treating horses with kindness and respect. He continuously steers clear of using any real force or violence. Many people, including the Queen of England, are extremely impressed with Monty's ability to convince a high strung horse to accept a saddle and a rider. Monty is able to use his technique on wild horses as well as those with severe behavior issues. Later in his life, Monty is able to apply the same principles successfully to deer and mustangs as well.

More summaries and resources for teaching or studying The Man Who Listens to Horses.

The Man Who Listens to Horses from BookRags. (c)2022 BookRags, Inc. All rights reserved.