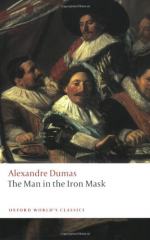 The Man in the Iron Mask Summary & Study Guide

The Man in the Iron Mask Summary & Study Guide Description

The Man in the Iron Mask Summary & Study Guide includes comprehensive information and analysis to help you understand the book. This study guide contains the following sections:

This detailed literature summary also contains Topics for Discussion and a Free Quiz on The Man in the Iron Mask by Alexandre Dumas, père.

"The Man in the Iron Mask" is a historical fiction novel, written by Alexandre Dumas, that takes place in the 1600s in France. Aramis, one of the former musketeers and a bishop, goes to the Bastille to visit Philippe, the imprisoned twin brother of the current king, Louis XIV. He tells Philippe that he can put him on the throne, switching him with his brother. Philippe is apprehensive at first, but Aramis insists the two men can do great things together. At a party in Vaux, thrown by Fouquet, one of the king's advisors, Aramis plans to make the switch. The king is not pleased with the party's lavishness, and uses missing money from the treasury as a reason to arrest Fouquet. He tells D'Artagnan, the captain of the musketeers and friend of Athos, Porthos, and Athos, to watch over Fouquet during the night until the king makes a final decision. Aramis kidnaps Louis XIV and puts Philippe in his place. Philippe, as king, says he will not arrest Fouquet. Aramis, overjoyed that his plan has worked and his friend is free, tells Fouquet about the switch of kings, but Fouquet quickly goes to free the king and set things right. Aramis and another former musketeer, Porthos, are forced to flee to Belle-Isle, one of Fouquet's islands. The king does not immediately arrest Fouquet, taking all his money before finally doing so. D'Artagnan chases after Fouquet on horseback and brings him in for the king.

Athos, another former musketeer, is living with his son, Raoul. Raoul is in love with Louise la Vallerie, his former lover, but she is the mistress of the king. To escape his anguish, Raoul goes to Africa, where he hopes to die in battle since he knows he will soon die of a broken heart anyway. D'Artagnan is ordered by the king to capture Porthos and Aramis, after taking Philippe to a new prison on St. Marguerite. D'Artagnan pursues them, but resigns instead of capturing his friends, unable to betray them. Aramis and Porthos try to defend themselves, but Porthos dies in the battle. Aramis escapes to Spain, where he becomes a duke. King Louis XIV convinces D'Artagnan not to resign, but cooperate with the king's will. Louis XIV pardons Aramis. Raoul is killed in action in Africa, and Athos dies as soon as he hears of his son's death. D'Artagnan eventually leads the king's army in an attack against Holland. He is soon promoted to marshall for his dedication to his country, but is killed by a cannonball right after learning of his promotion.