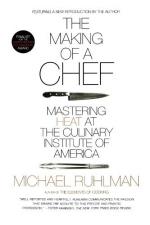 The Making of a Chef: Mastering Heat at the Culinary Institute of America Themes

Michael Ruhlman
This Study Guide consists of approximately 24 pages of chapter summaries, quotes, character analysis, themes, and more - everything you need to sharpen your knowledge of The Making of a Chef.

One of the first things that Ruhlman learns while at the CIA is perseverance. Erica, one of the students in the Skills class with Ruhlman, becomes a symbol of the importance of perseverance while taking her courses there. Initially, she burns or destroys everything she tries to cook. Even Chef Pardus gives up hope for her.

However, Erica does not give up. She works studiously while at the CIA and will eventually learn how to cook the sauces and dishes properly. In the end, she delivers a perfect split pea soup and executes her cooking practicals flawlessly. She will go on to have a successful experience while at the CIA.

Ruhlman himself also learns to stick with his courses at the CIA. When he later has conversations with President Metz and VP Ryan, he learns that stick-to-it-ness is one of the values that the chefs and instructors aim...

More summaries and resources for teaching or studying The Making of a Chef: Mastering Heat at the Culinary Institute of America.

The Making of a Chef: Mastering Heat at the Culinary Institute of America from BookRags. (c)2022 BookRags, Inc. All rights reserved.