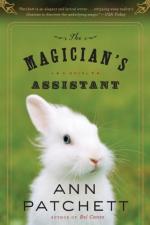 Ann Patchett
This Study Guide consists of approximately 33 pages of chapter summaries, quotes, character analysis, themes, and more - everything you need to sharpen your knowledge of The Magician's Assistant.

This detailed literature summary also contains Topics for Discussion and a Free Quiz on The Magician's Assistant by Ann Patchett.

The Magician's Assistant by Ann Patchett is a fascinating novel that explores how well people may know someone without knowing their history. After Parsifal's death, Sabine learns the truth about many things in his past that he had lied about. The Magician's Assistant is an interesting novel that investigates the importance of secrets from the past.

After Parsifal's death, Sabine learns that his family is not dead as he had always told her. When Parsifal's mother, Dot, asks to visit with her daughter, Bertie, Sabine agrees. Although the visit is awkward at first and Sabine is afraid to question Dot about Parsifal, she grows more comfortable with them as she takes them to see sites in Los Angeles that Parsifal frequented, as well as the cemetery where both Parsifal and Phan are buried. Sabine grows despondent after they leave and considers visiting them.

At Dot's invitation, Sabine agrees to visit the Fetters' home in Alliance, Nebraska where Parsifal was born. In Alliance, Sabine meets Kitty, Parsifal's sister, who greatly resembles him. From Kitty, Sabine learns that Parsifal was sent to the Nebraska Boys Reformatory after killing his father, not for being homosexual as Dot had told her. While she is in Alliance, Sabine learns a lot about Parsifal's past as Guy Fetters, which she analyzes in comparison to the man she was in love with. She develops a close relationship with Kitty, who she invites to live with her when Kitty has marital problems.

Throughout the novel, Phan and Parsifal visit Sabine in her dreams to encourage and comfort her, and the night before Bertie's wedding, Parsifal shows Sabine a card trick that is true magic. Sabine performs the card trick at Gertie's reception, though no one except her assistant realizes that it is truly magic. Bertie thinks that the trick is perfect, and as the only member of the family that was not all that familiar with Guy, she thinks it is the one he would have chosen, and in a way, that is exactly what he did.

More summaries and resources for teaching or studying The Magician's Assistant.