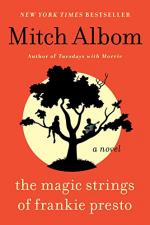 This detailed literature summary also contains Quotes and a Free Quiz on The Magic Strings of Frankie Presto by Mitch Albom.

The Magic Strings of Frankie Presto is the story of fictional legendary musician Frankie Presto, entwining his life story with twentieth century music history. Blessed by the Spirit of Music, Frankie is gifted with six magical strings on his guitar that have the power to save lives. His extraordinary life story intersects with real historical events and encounters with famous musicians.

The novel is told from the first-person perspective of Music, the spiritual embodiment of musical talent. The narrative is interspersed with firsthand accounts from mourners at Frankie Presto's funeral, many of them famous figures, speaking to unknown sources such as reporters or other attendees.

Part One deals with Frankie's birth and childhood-- Frankie is born in Spanish Church in 1936 during a fascist raid. Upon birth, Frankie grabs a large handful of The Spirit of Music. Frankie stays quiet during the raid and survives thanks to his mother humming a song by Francisco Tárrega to him. A nun takes Frankie in after his mother dies, but she soon grows exasperated and throws Frankie in a river to die. He is found by a sardine maker who adopts him. The sardine maker treats Frankie like a son and nurtures his flair for music along with the help of a passionate drunk guitar player named El Maestro. Frankie then flees the danger of fascism in Spain, bringing the magical guitar El Maestro gave him. Frankie soon learns his guitar has the ability to save lives with its magical strings. The story cuts back and forth to Frankie's funeral where mourners tell legendary stories about Frankie's stardom in the fifties when he was a household name pop singer.

In Part Two, Frankie meets Django Reinhardt, a famous gypsy musician who takes Frankie on tour. Frankie ends up homeless after learning the truth about his past and that his foster father lied to him about his origins. He passes through an orphanage and leaves to play gigs, meeting famous musicians of the twentieth century. With his magical guitar, he saves the life of a girl he once met in Spain, Aurora York, and sets out on a quest to find her. He eventually tracks her down to Tennessee. The narrative jumps to the seventies where Frankie is extremely high at the famous Woodstock festival. He has married Aurora and they have reconciled after some unknown fight. Frankie is on a strange quest to deliver his wife a carton of eggs.

In Part Three, Frankie and Aurora live together in New Orleans and get married. They are happy living a poor bohemian lifestyle until Frankie's success pulls them apart. Frankie chooses to become a singer over a guitar player, his true passion, and his meteoric rise pushes Aurora away. Frankie re-marries an actress, yet his life is molded entirely by his agent and he is unhappy.

The narrative jumps back to the Woodstock festival where Frankie completes a journey to the stage, revealing Aurora is not there and that they lost a baby through Frankie's drug use. Frankie plays a beautiful impromptu performance on stage then mutilates his hand to punish himself for losing the baby.

In Part Four, Frankie abandons stardom and waits for Aurora on a park bench in London every day for a long time. Tony Bennet helps Frankie re-unite with Aurora by broadcasting the story on the radio. Frankie and Aurora move to a small island in New Zealand to escape the limelight and reconnect. They adopt an abandoned baby they find in the woods. Lyle Lovett and his band The Clever Yells find Frankie in the 80s, seeking musical guidance. Frankie records a record with them that becomes a cult hit in music circles. The narrative cuts back to Frankie playing a USO show in Vietnam, where he saves the life of a young soldier with his guitar.

In Part Five, Frankie and his family return to Spain. Frankie learns that his sardine-maker foster father lied to him out of kindness. Frankie tries to track down his old guitar instructor El Maestro, deciding to play in the same taberna they did the night before Frankie fled the country. El Maestro never shows up, but Frankie encounters El Maestro's old friend, Alberto, in the alley behind the taberna. Alberto admits to killing El Maestro for money and tries to rob Frankie. Alberto charges Frankie, but a mysterious figure shoots Alberto and saves Frankie.

In Part Six, Frankie spends three years in a monastery repenting for wanting to kill Alberto. He re-unites with Aurora and their daughter. They move back to America to support their daughter while she goes to university to learn music. Frankie and Aurora are in New Orleans during Hurricane Katrina, and Aurora suffers an accident that kills her. Frankie is heart-broken the rest of his life. His daughter plays a competition in the Francisco Tárrega competition, where Frankie meets the nun who once tried to drown him. She reveals she has followed Frankie his whole life and protected him as penance for her actions. He plays guitar with his daughter at the festival and forgives the nun as he dies on stage.